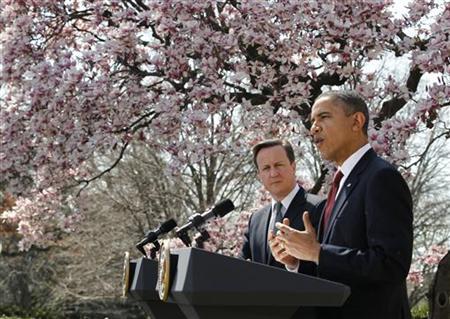 U.S. President Barack Obama speaks as he hold a joint press conference with British Prime Minister David Cameron in the Rose Garden of the White House in Washington, March 14, 2012.

(Reuters) – Britain has decided to cooperate with the United States in a bilateral agreement to release strategic oil stocks, two British sources said, in an effort to prevent high fuel prices derailing economic growth in an election year.

A formal request from the United States to the UK to join forces in a release of oil from government-controlled reserves is expected “shortly” following a meeting on Wednesday in Washington between President Barack Obama and Prime Minister David Cameron, who discussed the issue, one source said.

“We regularly consult with the British on energy issues and any discussion that we had was in that context. We will continue to monitor the situation and consult with them and others,” an Obama administration official said.

Rising world oil prices, up to $125 a barrel for Brent crude, have pushed gasoline prices up sharply this year and threaten to choke economic recovery ahead of Obama’s bid for re-election in November.

Details of the timing, volume and duration of the emergency drawdown have yet to be settled but a detailed agreement is expected by the summer, one of the sources said.

Other countries may also be approached by Washington to contribute, a further source said,Japan among them.

Previous emergency oil drawdowns, the latest last year, have been coordinated by the 28-member Paris-based International Energy Agency (IEA) to meet its mandate to cover substantial supply disruptions on the world oil market. Libyan oil production was closed for much of last year during civil war.

The IEA so far has resisted pressure to coordinate a broader release, saying that countries may legitimately decide to release oil unilaterally.

“The Obama administration can only take so much political pain from rising gasoline prices, which pose a serious threat to the economy and the president’s re-election,” said Bob McNally, a former White House energy adviser and head of U.S. energy consultancy Rapidan.

“SPR (Strategic Petroleum Reserve) use is more a matter of when than if. The administration strongly desires international support and coordination from other strategic stock holders, but is encountering stiff resistance from some IEA members who think strategic stocks should only be used for severe supply disruptions,” McNally said.

Top officials including Energy Secretary Steven Chu and Treasury Secretary Timothy Geithner have said publicly in recent weeks that a oil release is among the options the government is considering.

While there is no significant disruption of world oil supplies at the moment, sanctions on Iran are expected to cut its output when a European Union embargo takes effect from July.

Minor stoppages from South Sudan, Yemen and Syria also have contributed to the rise in oil prices.

“At the moment there is no need to use it (strategic reserves),” IEA executive director Maria van der Hoeven said at an industry conference in Kuwait on Wednesday.

“There is more supply coming to the market from OPEC countries. There is no price trigger for the stocks release, the trigger is a disruption in physical supplies.”

OPEC’s biggest producer Saudi Arabia, the only oil producer with any spare capacity, has said it is prepared to fill a supply gap but will only do so to meet additional demand, rather than as a preventative measure.

While the release would be of crude oil from the national 700-million-barrel SPR, the UK contribution is likely to come from a reduction of the minimum reserves of crude and refined products that UK commercial oil companies are required to hold.