Another day, another TSA travel nightmare 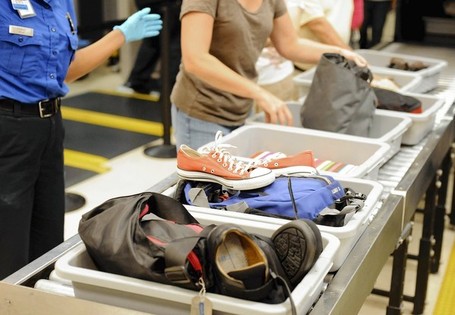 Wheelchair-bound 95-year-old veteran Omer Petti and his 85-year-old partner Madge Woodward were treated like terrorists by TSA agents at San Diego International airport, ostensibly so TSA workers could separate them from $300 dollars in cash which subsequently went missing.

“Can you imagine an 85-year-old lady and 95-year-old retired Air Force Major in wheelchairs being treated like terrorists?” Petti asked the Detroit News’ Marney Keenan.

Given the TSA’s recent history – yes – veterans and old people are two of the federal agency’s primary targets and are routinely subjected to intense harassment and abuse.

After Petti had removed his shoes, belt, clothing and other accessories he was ordered by a TSA agent to place a money clip containing $300 in folded bills into its own separate bin.

After walking through a metal detector, both Petti and Woodward were patted down, with Woodward being taken to a separate room for extra “screening” due to the fact that residue from her nitroglycerin heart pills had set off an alarm.

“When I was patted down, I’ve never before been touched in every part of my body before,” Woodward said.

After TSA workers had routed through their personal belongings and fondled their every body part , the two were allowed to leave but Petti noticed the $300 was missing.

“When I told him we were going to miss our flight he asked me if I was objecting or refusing his request.” Petti says. “I said: ‘No, I’d do anything I was asked, I would just like to know where my $300 went.’ “

Fearing they would miss their flight, Petti and Woodward had to settle for filling out a “Tort Claim Package,” and were subsequently rushed to the departure point at a dangerously high speed by a wheel chair attendant.

After analyzing security tapes of the incident, San Diego Harbor Police said the footage was “too blurry,” and the TSA seemingly just wants Petti to forget about his missing $300.

Without writing an article of book-length proportions it is impossible to list all the examples of TSA agents having been caught in criminal acts. It comes to the point where simply regurgitating prior incidents serves no purpose. There can no longer be any doubt that the Transportation Security Administration has become a beacon for perverts and criminals who take a TSA job because it gives them free reign to abuse, sexually harass and steal from the public – often targeting the weakest members of society.

Let’s try a different approach. Listed below are just the most recent headlines from Google News concerning TSA workers involved in criminal activity, negligence and harassment.

Remember, all these stories are just from the past couple of weeks. How can any federal agency with this level of rampant corruption, incompetence, criminality and sheer negative publicity still manage to survive in its current form?

If the words of former TSA head Kip Hawley, who this week spoke of how the TSA had made traveling within the United States an “unending nightmare,” carry any weight, hopefully not for very much longer.