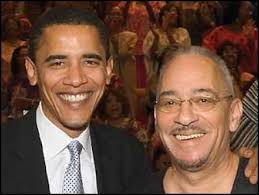 ‘Man, the media ate me alive,” Wright told me when we met in his office at Chicago’s Kwame Nkrumah Academy. “After the media went ballistic on me, I received an e-mail offering me money not to preach at all until the November presidential election.”

“Who sent the e-mail?” I asked Wright.

“It was from one of Barack’s closest friends.”

“He offered you money?”

“Not directly,” Wright said. “He sent the offer to one of the members of the church, who sent it to me.”

“How much money did he offer you?”

“Did Obama himself ever make an effort to see you?”

“Yes,” Wright said. “Barack said he wanted to meet me in secret, in a secure place. And I said, ‘You’re used to coming to my home, you’ve been here countless times, so what’s wrong with coming to my home?’ So we met in the living room of the parsonage of Trinity United Church of Christ, at South Pleasant Avenue right off 95th Street, just Barack and me. I don’t know if he had a wire on him. His security was outside somewhere.

“And one of the first things Barack said was, ‘I really wish you wouldn’t do any more public speaking until after the November election.’ He knew I had some speaking engagements lined up, and he said, ‘I wish you wouldn’t speak. It’s gonna hurt the campaign if you do that.’

“And what did you say?” I asked. “I said, ‘I don’t see it that way. And anyway, how am I supposed to support my family?’ And he said, ‘Well, I wish you wouldn’t speak in public. The press is gonna eat you alive.’