Still no independent testing despite cancer warnings from experts 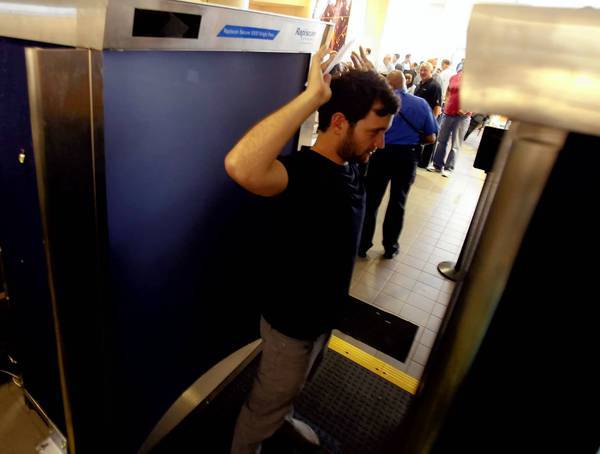 A study that on the surface appears to be independent has claimed that there are no safety concerns regarding radiation firing body scanners used by the TSA in the nation’s airports. However, the research is based purely on old data that was released by the federal agency itself.

The LA Times reports today that the study, conducted by assistant professor of biomedical engineering Taly Gilat Schmidt of the Marquette University College of Engineering, has found that the scanners “do not expose passengers to dangerous levels of radiation.”

The report notes that Schmidt’s “new independent analysis” found that “the radiation levels are considerably lower than those of other X-ray procedures such as mammograms.”

Schmidt’s findings are due to be published in the Medical Physics journal next month, and will surely be lauded by the TSA, which has sought to fend off constant criticism from concerned scientists and experts who have warned that the radiation from backscatter scanners subjects passengers to an increased risk of cancers.

However, even the LA Times report itself admits that the analysis will likely not allay those concerns because, once again, no independent testing of the body scanners was undertaken.

As the report notes, “Schmidt, did not test the actual machines. Instead, she based her conclusions on scanner radiation data released publicly by the TSA.”

“She ran the numbers through simulation software that modeled how X-ray photons travel through a body.” the report concludes.

The ranking Republican on the Senate Homeland Security and Governmental Affairs Committee, Sen. Susan Collins noted that the study does not represent a definitive independent analysis.

“We do not truly know the risk of this radiation exposure over multiple screenings, for frequent fliers, those in vulnerable groups, or TSA’s own employees operating the machines,” she said in a statement.

Sen. Collins has introduced legislation to have independent tests carried out on the Backscatter radiation body scanners.

Collins’ bill would make it a requirement for the TSA to find an independent laboratory to thoroughly test the levels of radiation being emitted by the scanners and evaluate the potential health risks.

The bill would require the DHS’s Under Secretary for Science and Technology to identify and contract with an independent testing lab “in consultation with the National Science Foundation, from among laboratories with expertise in the conduct of similar studies.”

This is not the first time that old data has been presented to justify the continued use of the scanners.

In February, a  government report cited as newly authoritative by TSA head John Pistole, merely repeated old and questionable information that had been available on the TSA’s website for two years.

The report (PDF), by The Department of Homeland Security’s Inspector General, concluded that each backscatter radiation machine being used by the TSA “delivers an extremely low dose of ionizing radiation” with levels “below the acceptable limits”.

“Specifically, to reach annual radiation dose limits, a passenger would have to receive more than approximately 17,000 screenings in a 12-month period, which is equivalent to approximately 47 screenings per day, 365 days per year.”

However, those claims are drawn from an old Johns Hopkins University assessment dating from August 2010, and use yearly limits of radiation set by the American National Standards Institute.

The figures cited are purely calculations and are not drawn from any scientific evidence. Dozens of radiologists and scientists have warned that decades of research has not established any dose of radiation as safe.

Indeed, even Johns Hopkins scientists have warned that the TSA body scanners will lead to an increase in cancers.

Despite this, and an admission in the DHS report that the body scanners have not been regularly tested to ensure they are calibrated correctly, the TSA said the report vindicated earlier statements that the machines are safe.

“We believe this report fully endorses TSA’s extensive efforts to keep the traveling public safe, which is our agency’s ultimate priority,” TSA Administrator John Pistole wrote in response to the report.

Pistole himself cited the report back In November, when the TSA head reneged on a promise to the Senate to instigate further studies into the safety of the radiation firing scanners. Pistole had promised to commission further independent research into the safety risks associated with full body scanners, following a Europe wide ban on the machines. However, within two weeks the TSA head had backtracked, saying the upcoming IG report would contain new findings and that further study was unnecessary at this time.

As it turns out, unsurprisingly, the report simply regurgitated the same unsubstantiated claims the TSA has been making for over two years.

Scrutiny over radiation exposure was heightened recently following apparent efforts by the TSA to cover-upa “cluster” of cancer cases amongst scanner operators at Boston-Logan airport. According to FOIA documents obtained by the Electronic Privacy Information Center (EPIC), when Union representatives in Boston discovered a “cancer cluster” amongst TSA workers linked with radiation from the body scanners, the TSA sought to downplay the matter and refused to issue employees with dosimeters to measure levels of exposure.

The documents indicated how, “A large number of workers have been falling victim to cancer, strokes and heart disease.”

In addition, further documents obtained by EPIC show how the TSA “publicly mischaracterized” findings of the National Institute of Standards and Technology (NIST), in stating that the agency had positively confirmed the safety of full body scanners in tests.

Numerous other studies conducted by prestigious universities and health authorities, including Columbia University, the University of California, and the Inter-Agency Committee on Radiation Safety, have warned that the devices will lead to an increase in cancers.

Despite the fact that almost every independent study has concluded that the machines will cause cancer cases to increase, the TSA still routinely denies the threat.

In March, The TSA was forced into a promise that it would retest every full-body X-ray scanner after maintenance records on some of the devices showed radiation levels 10 times higher than expected.

As we reported in January, the DHS also plans to expand the use of X-ray scanning machines at US border crossings, despite the availability of millimeter-wave machines that do the same job without emitting harmful radiation.