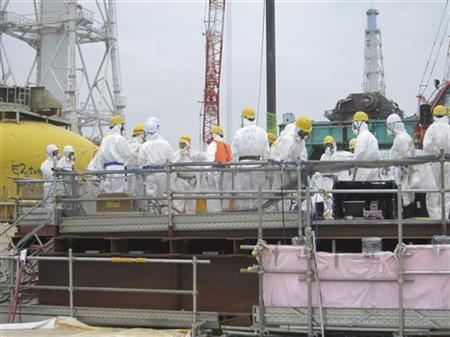 A company charged with decontaminating the devastated Fukushima Nuclear Power Plant encouraged its workers to falsely lower their radiation dosimeter readings by covering the devices with lead, according to a leaked tape of an internal meeting.

Nuclear plant workers are not allowed to be exposed to more than 50 millisieverts of radiation a year. But managers at Build-up, a company that provided insulation on the pipes that would pump irradiated water out of the plant, believed that doses experienced inside the plant, which suffered a meltdown, meant workers would quickly reach their limit.

A senior executive gave the team at the site lead boxes that they were told to make into shields.

The workers were then told to place these over the dosimeters. Lead effectively blocks radiation, and produces a significantly lower reading.

When some of them refused, the executive called a meeting.

The executive cajoled the workers by saying, “You can no longer make a living when the dose runs out,” according to a tape that was given by somebody present at the meeting to the Asahi Shimbun newspaper.

“I think this is almost a crime,” retorted one of the workers.

An argument broke out, and while the executive said the decision was voluntary, the rhetoric became threatening.

“Perhaps you are not cut out for working at nuclear plants,” he said. “Go back to your hometown and do some other job.”

Three of the workers resigned immediately, while at least nine agreed to wear the shields.

Fukushima was severely damaged during a tsunami and earthquake last March. Three of its reactors suffered full meltdowns, releasing potentially fatal doses of radiation exceeding the normal levels by a factor of thousands.

Official logs list one of the workers who agreed to wear the shield among those exposed to the highest dose of radiation out of all 5,000 clean-up operatives at the plant. His real exposure is likely to have been exponentially higher.

Build-up worked at the site from November 2011 until March 2012. The company has admitted that workers used the shields on at least one occasion.

The government says it will launch an investigation.

TEPCO, the much-maligned plant operator who hired Build-up, say they were aware of the existence of the shields, but believed they were never used by workers. It is not clear if shields were also used by other contractors.

A parliamentary investigation called the meltdown, which was one of the worst accidents in the history of nuclear energy, “a profoundly man-made disaster” and “the result of collusion between the government, the regulators and TEPCO, and the lack of governance by said parties.”

A newly-published Stanford University study says that between 15 and 1,300 people could die as a result of exposure to radiation from Fukushima.