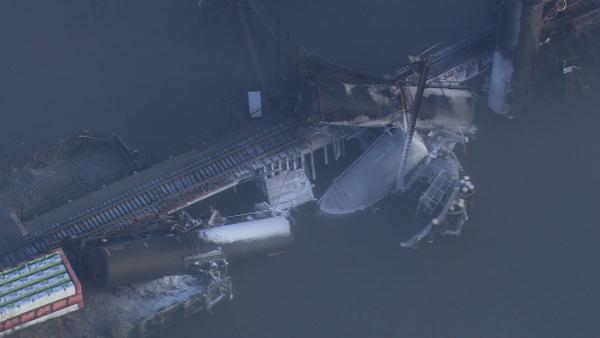 PAULSBORO, N.J. (AP) — Authorities say only one of the derailed train cars in southern New Jersey has leaked hazardous material.

The Department of Environmental Protection says the car leakedvinyl chloride as a gas and all of it has since dissipated.

The chemical can cause nausea and breathing problems.

Several tanker cars derailed in the accident Friday morning on a rail bridge in Paulsboro and toppled into a creek. Part of the bridge has buckled but the full extent of the damage is not yet known.

Officials at Underwood-Memorial Hospital say 11 people have been transported with complaints related to the derailment and five more arrived on their own. The hospital’s communication’s office says all are believed to have complained of having respiratory problems.

Residents in three towns were told to stay inside after the derailment.

The cause of the accident hasn’t been determined.