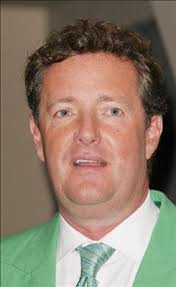 CNN’s Piers Morgan has been on a rabid anti-gun rant since July’s Aurora, Colorado, shootings that has gotten even more venomous after Friday’s massacre at Sandy Hook Elementary School in Connecticut.

On Tuesday, he rudely and disgracefully tore into guest Larry Pratt, the Executive Director of Gun Owners of America, calling him “an unbelievably stupid man” who’s “dangerous,” concluding the interview by saying, “You shame your country” (video follows with transcript and commentary):

PIERS MORGAN, HOST: The AR-15, as we’ve now seen from the last three mass shootings in America, Aurora, the shopping mall in Oregon, and now at Sandy Hook school, is the preferred choice of weapon for disturbed young men who want to commit mass atrocity, can fire hundreds of bullets at rapid speed, if you have the right magazines.

The president of the United States has indicated he wants to ban assault weapons like this. What is your view?

LARRY PRATT, EXECUTIVE DIRECTOR, GUN OWNERS OF AMERICA: I think we need to ban gun control laws that keep people from being able to protect themselves. The problem is not going to go away if we ban this or that gun. We’ve tried that. That doesn’t work. Doesn’t even work in England. You have mass murders there all over Europe. There have been mass murderers.

PRATT: The solution is for people to be able to defend themselves at the point of the crime and not wait for 20 minutes for the police come after everybody is dead.

MORGAN: What you’ve just said, Mr. Pratt, was an absolute lie. The gun murder rate in countries like Britain or Germany or Australia, we’ve all suffered massacres many years ago, similar nature, have — there are 35 people killed a year. Your country has 12,000.

MORGAN: They had a massacre. And they got rid of the assault weapons.

PRATT: Your violent crime rate is higher than ours as is the violent crime rate in Australia. America is not the Wild West that you are depicting. We only have the problems in our cities, and unhappily, in our schools where people like you have been able to get laws put on the books that keep people from being able to defend themselves.

I honestly don’t understand why you would rather have people be victims of a crime than be able to defend themselves. It’s incomprehensible.

PRATT: It seems to me that you’re morally obtuse. You seem to prefer being a victim to being able to prevail over the criminal element. And I don’t know why you want to be the criminal’s friend.

MORGAN: What a ridiculous argument. You have absolutely no coherent argument whatsoever. You don’t — you don’t actually give —

PRATT: You have no —

MORGAN: You don’t give a damn, do you, about the gun murder rate in America? You don’t actually care. All you care about —

PRATT: It seems to me that facts don’t bother you, do they, Mr. Morgan?

MORGAN: — is the right for any — Americans — you would like to see —

PRATT: Facts seem to — they bounce right off of your head.

MORGAN: No, no, let’s deal with some facts.

MORGAN: Can you answer my question?

PRATT: I’m answering your question. I wish you could understand it. Because you’re talking against self-defense.

PRATT: You’re talking against people being able to protect themselves.

PRATT: And you don’t want to hear it, that’s why you keep interrupting me.

PRATT: Well, Brits tend to do that, don’t they?

MORGAN: Stop being so facetious. I just want you to answer this one question. Post what happened at Sandy Hook, your answer to this problem of repeated use of this weapon with these high-capacity magazines is to continue letting Americans buy them with impunity, and to not concern yourself with these mass shootings, is that right?

PRATT: The Second Amendment means what it says, and meanwhile, you want to continue laws against self-defense. Laws that prohibit self-defense. Laws that prohibit teachers and other faculty, other members of the administration in schools from being able to defend themselves if they have a concealed carry permit. The laws prohibit them right now. We have been lobbying against those laws since they were put on. We will continue to do so, pointing out that that is where the problem is.

And for you to support them means that you’re really blind to the role that that plays in enabling murders to operate within impunity.

MORGAN: Yes, I know — I know why sales of these weapons have been soaring in the last few days. It’s down to idiots like you.

Mr. Pratt, thank you for joining me.

When we come back —

MORGAN: You know what, you wouldn’t understand the meaning of the phrase high-level argument. You are a dangerous man espousing dangerous nonsense. You shame your country.

MORGAN: Yes. Sure. I know all about role models and you’re not one of them.

Honestly, is that what the folks at CNN consider to be a proper interview style?

It’s one thing for an anchor or host to disagree with his guest, but to attack them for a differing view is not what journalism is supposed to be about. Or is that no longer important to CNN as it struggles to get viewers as well as its relevancy back?

The reality is that there are many in this nation that believe that the current gun laws promote violence rather than reduce it, and that if there had been someone armed at Sandy Hook Elementary School as well as the movie theater in Aurora, Colorado, the shootings either wouldn’t have taken place at all or would have resulted in less loss of life.

Irrespective of what the anti-gun left represented by folks such as Morgan think, this is a position that has its place in this debate even after this most recent event.

If America is going to have an honest discussion about guns post-Sandy Hook, it should be a debate rather than a lecture.

Unfortunately, much like global warming, that’s not what typically happens here anymore. The left has its view, and the goal is to ram it down everyone’s throat until it enforces its will on the population.

Sadly, so-called journalists such as Morgan believe it’s their responsibility to aid and abet the bullying rather than truly advancing a meaningful dialogue.

If only that weren’t the case.