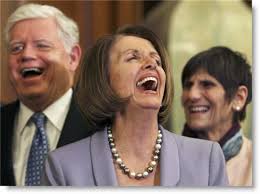 Democrats say they want to raise as much as $1 trillion in new revenues through tax reform later this year to balance Republican demands to slash mandatory spending.

Democratic leaders have had little time to craft a new position for their party since passing a tax deal Tuesday that will raise $620 billion in revenue over the next 10 years.

The emerging consensus, however, is that the next installment of deficit reduction should reach $2 trillion and about half of it should come from higher taxes.

This sets up tax reform as one of the biggest fights of the 113th Congress, which began on Thursday.

Republicans say tax reform should be revenue-neutral. Additional revenues collected by eliminating or curbing tax breaks and deductions should be used to lower rates.

“I’m in favor of doing tax reform but I think tax reform ought to be revenue-neutral, as it was back during the Reagan years.

“We’ve resolved this issue. Look, we don’t have this problem because we tax too little. We have it because we spend way, way too much,” McConnell said Sunday on NBC’s “Meet the Press.”

“We’ve done about $2 trillion. I thought $4 trillion is the goal we should reach. I think we’re about halfway there. We need another $2 trillion,” said Sen. Ben Cardin (D-Md.), a member of the Finance Committee, which has jurisdiction over tax reform.

He said the $917 billion cut under the Budget Control Act passed in the summer of 2011, combined with $620 billion in revenues from Tuesday’s tax deal and interest savings, adds up to about $2 trillion.

Cardin said the ratio of spending cuts to higher tax revenues “should be about even” in the next deficit-reduction deal passed by Congress.

Sen. Jon Tester, a centrist Democrat from Montana who won a close reelection in November, set out similar parameters.

He said the broad goal for deficit reduction should be in the $4 trillion to $5 trillion range and “we should strive for [a] one-for-one” ratio of spending cuts to additional tax revenues.

The White House also supports a 1:1 ratio of spending cuts to tax increases as Congress seeks to finish the fiscal work left unresolved by the recently completed 112th Congress.

White House officials point to last week’s fiscal-cliff agreement to “buy down” the sequester for two months. The deal delayed the implementation of automatic across-the-board spending cuts to domestic and defense programs and paid for it with $12 billion in revenues and $12 billion in spending cuts — evenly divided between defense and non-defense spending.

Administration officials view that as a template for future deficit-reduction agreements.

But Democrats in Congress are not yet unified on the issue. Sen. Tim Kaine, a Democrat who won his first term in November’s election, said the spending cut-to-tax increase ratio should be higher.

“Obviously, that second half of the fiscal cliff is the tough spending decisions,” he said. “During the course of the campaign I often talked about 2-1 as a total. That would count all the spending reductions that have already been agreed to.”

“I think if you’re looking at a 70-30 ratio, somewhere in between 2 to 1 and 3 to 1, I think that’s a reasonable position,” said newly elected Sen. Chris Murphy (D) of Connecticut, who noted he is from a “fiscally responsible” state.

Like Kaine, Murphy said “you could factor in the cuts already made.”

Congress agreed to cut spending by $917 billion in 2011 and to raise $620 billion in additional tax revenues last week, settling on a ratio of roughly 3 to 2 so far.

Sen. Charles Schumer (D-N.Y.) said Friday that the ratio of spending cuts to tax revenues to date has been tilted more heavily toward spending. Counting the 2011 Budget Control Act and the year-end tax deal, he argues the split is closer to $1.1 trillion in spending cuts and $600 billion in revenues — but he appears to be counting interest savings from spending cuts and not from tax increases.

The biggest question for Democrats is how much revenue is realistically available through tax reform.

Former Sen. Kent Conrad (D-N.D.), a longtime chairman of the Senate Budget Committee, argues the federal government loses $1.2 trillion a year because of various tax breaks, a large pool for lawmakers to draw from to reduce the deficit.

“Through the tax code, we spend more there than we spend through all the appropriated accounts,” he said in his Senate farewell speech.

Conrad displayed a chart on the Senate floor Wednesday showing that people in the top 1 percent of income earners collect over $250,000 in after-tax income from tax expenditures. These expenditures are defined as revenue losses due to special exclusions, exemptions or deductions from gross income.

But policy analysts say the amount Congress can raise by eliminating tax expenditures will be constrained by political realities.

President Obama’s proposal to limit the value of itemized deductions to 28 percent evoked a backlash from the real estate industry and charitable groups. The mortgage interest and charitable tax deductions are two major drains on federal revenue.

Potential future revenue from limiting exemptions and deductions for wealthy taxpayers is also limited by the personal exemption phase-out and Pease — a cap on itemized deductions — provisions of the New Year’s Day tax deal. They account for $152 billion of the projected revenues from the deal.

Jim Kessler, senior vice president for policy at Third Way, a centrist Democratic think tank, thinks the most Democrats can get from tax reform is about $300 billion to $400 billion. He said negotiators can find an additional $100 billion in revenue by switching the chained-CPI formula for calculating cost-of-living increases for Social Security and other federal programs.