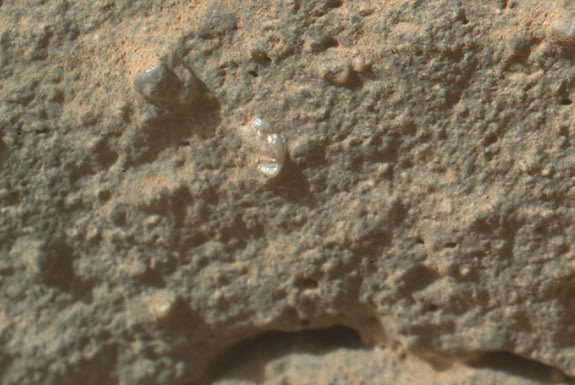 An odd flower-like feature spotted on Mars by NASA’s Curiosity rover continues to perplex researchers, who nevertheless stress that its origins are not biological.

The object garnered a lot of attention after Curiosity photographed it last month, with many Internet users quickly dubbing it the “Mars flower.” The feature is actually a rounded, light-colored pebble slightly larger than a grain of sand, but determining its precise mineralogical makeup would require more information, researchers said.

“It could be a lot of things, but without some chemical information to back me up, I’d really hesitate to say what it is,” Aileen Yingst, of the Planetary Science Institute in Tucson, Ariz., told reporters today (Jan. 15).

“I’m not trying to be cagey,” added Yingst, the deputy principal investigator for Curiosity’s Mars Hand Lens Imager, or MAHLI. “I’m just trying to be clear that a light grain could be a lot of different things.”

The so-called Mars flower juts from a rock near an outcrop mission scientists have named “John Klein,” in honor of a former Curiosity deputy project manager who died in 2011. The car-size rover is preparing to use its drill for the first time in the area, boring into a John Klein rock over the next two weeks or so.

The outcrop and its environs show many signs of long-ago exposure to liquid water, including water-deposited mineral veins that fill fissures in the rock. John Klein is thus a suitable drilling target for Curiosity, whose main goal is to determine if Mars has ever been capable of supporting microbial life.

The Mars flower is not a sign of life, but it does add to the site’s intrigue, researchers said.

“It does indicate that you have, you know, a relatively diverse set of grains just in this one sample,” Yingst said.

The 1-ton Curiosity rover landed inside Mars’ huge Gale Crater on the night of Aug. 5, 2012. NASA officials have called the six-wheeled robot the most capable planetary explorer ever launched. It carries 17 different cameras and 10 science instruments, including gear that can detect organic compounds — the carbon-containing building blocks of life as we know it.