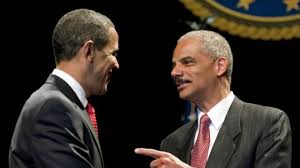 A confidential Justice Department memo concludes that the U.S. government can order the killing of American citizens if they are believed to be “senior operational leaders” of al-Qaida or “an associated force” — even if there is no intelligence indicating they are engaged in an active plot to attack the U.S.

The 16-page memo, a copy of which was obtained by NBC News, provides new details about the legal reasoning behind one of the Obama administration’s most secretive and controversial polices: its dramatically increased use of drone strikes against al-Qaida suspects, including those aimed at American citizens, such as the  September 2011 strike in Yemen that killed alleged al-Qaida operatives Anwar al-Awlaki and Samir Khan. Both were U.S. citizens who had never been indicted by the U.S. government nor charged with any crimes.

The secrecy surrounding such strikes is fast emerging as a central issue in this week’s hearing of White House counterterrorism adviser John Brennan, a key architect of the drone campaign, to be CIA director.  Brennan was the first administration official to publicly acknowledge drone strikes in a speech last year, calling them “consistent with the inherent right of self-defense.” In a separate talk at the Northwestern University Law School in March, Attorney General Eric Holder specifically endorsed the constitutionality of targeted killings of Americans, saying they could be justified if government officials determine the target poses  “an imminent threat of violent attack.”

But the confidential Justice Department “white paper” introduces a more expansive definition of self-defense or imminent attack than described  by Brennan or Holder in their public speeches.  It refers, for example, to what it calls a “broader concept of imminence” than actual intelligence about any ongoing plot against the U.S. homeland.

Michael Isikoff, national investigative correspondent for NBC News, talks with Rachel Maddow about a newly obtained, confidential Department of Justice white paper that hints at thedetails of a secret White House memo that explains the legal justifications for targeted drone strikes that kill Americans without trial in the name of national security.

“The condition that an operational  leader present an ‘imminent’ threat of violent attack against the United States does not require the United States to have clear evidence that a specific attack on U.S. persons and interests will take place in the immediate future,” the memo states.

Read the entire ‘white paper’ on drone strikes on Americans

Instead, it says,  an “informed, high-level” official of the U.S. government may determine that the targeted American  has been “recently” involved in “activities” posing a threat of a violent attack and “there is  no evidence suggesting that he has renounced or abandoned such activities.” The memo does not define “recently” or “activities.”

As in Holder’s speech, the confidential memo lays out a three-part test that would make targeted killings of American lawful:  In addition to the suspect being an imminent threat, capture of the target must be “infeasible, and the strike must be conducted according to “law of war principles.” But the memo elaborates on some of these factors in ways that go beyond what the attorney general said publicly. For example, it states that U.S. officials may consider whether an attempted capture of a suspect  would pose an “undue risk” to U.S. personnel involved in such an operation. If so, U.S. officials could determine that the capture operation of the targeted American would not be feasible, making it lawful for the U.S. government to order a killing instead, the memo concludes.

The undated memo is entitled “Lawfulness of a Lethal Operation Directed Against a U.S. Citizen who is a Senior Operational Leader of Al Qa’ida or An Associated Force.”  It was provided to members of the Senate Intelligence and Judiciary committees in June by administration officials on the condition that it be kept confidential and  not discussed publicly.

Although not an official legal memo, the white paper was represented by administration  officials as a policy document that closely mirrors the arguments of classified memos on targeted killings by the Justice Department’s  Office of Legal Counsel, which provides authoritative legal advice to the president and all executive branch agencies. The administration has refused to turn over to Congress or release those memos publicly — or even publicly confirm their existence. A source with access to the white paper, which is not classified, provided a copy to NBC News.

“This is a chilling document,” said Jameel Jaffer, deputy legal director of the ACLU, which is suing to obtain administration memos about the targeted killing of Americans.  “Basically, it argues that the government has the right to carry out the extrajudicial killing of an American citizen. … It recognizes some limits on the authority it sets out, but the limits are elastic and vaguely defined, and it’s easy to see how they could be manipulated.”

In particular, Jaffer said, the memo “redefines the word imminence in a way that deprives the word of its ordinary meaning.”

A Justice Department spokeswoman declined to comment on the white paper. The spokeswoman, Tracy Schmaler, instead pointed to public speeches by what she called a “parade” of administration officials, including Brennan, Holder, former State Department Legal Adviser Harold Koh and former Defense Department General Counsel Jeh Johnson that she said outlined the “legal framework” for such operations.

Pressure for turning over the Justice Department memos on targeted killings of Americans appears to be building on Capitol Hill amid signs that Brennan will be grilled on the subject at his confirmation hearing before the Senate Intelligence Committee on Thursday.

On Monday, a bipartisan group of 11 senators — led by Democrat Ron Wyden of Oregon — wrote  a letter to President Barack Obama asking him to release all Justice Department memos on the subject. While accepting that “there will clearly be circumstances in which the president has the authority to use lethal force” against Americans who take up arms against the country,  it said, “It is vitally important … for Congress and the American public to have a full understanding of how  the executive branch interprets the limits and boundaries of this authority.”

The completeness of the administration’s public accounts of its legal arguments was also sharply criticized last month by U.S. Judge Colleen McMahon in response to a  lawsuit brought by the New York Times and the ACLU seeking access to the Justice Department memos on drone strikes targeting Americans under the Freedom of Information Act.  McMahon, describing herself as being caught in a “veritable Catch-22,”  said she was unable to order the release of the documents given “the thicket of laws and precedents that effectively allow the executive branch of our government to proclaim as perfectly lawful certain actions that seem on their face incompatible with our Constitution and laws while keeping the reasons for the conclusion a secret.”

In her ruling, McMahon noted that administration officials “had engaged in public discussion of the legality of targeted killing, even of citizens.” But, she wrote, they have done so “in cryptic and imprecise ways, generally without citing … any statute or court decision that justifies its conclusions.”

In one passage in Holder’s speech at Northwestern in March,  he alluded – without spelling out—that there might be circumstances where the president might order attacks against American citizens without specific knowledge of when or where an attack against the U.S. might take place.

“The Constitution does not  require the president to delay action until some theoretical end-stage of planning, when the precise time, place and manner of an attack become clear,”  he said.

But his speech did not contain the additional language in the white paper suggesting that no active intelligence about a specific attack is needed to justify a targeted strike. Similarly, Holder said in his speech that targeted killings of Americans can be justified  if “capture is not feasible.” But he did not include language in the white paper saying that an operation might not be feasible “if it could not be physically effectuated during the relevant window of opportunity or if the relevant country (where the target is located) were to decline to consent to a capture operation.” The speech also made no reference to the risk that might be posed to U.S. forces seeking to capture a target, as was  mentioned in the white paper.

The white paper also includes a more extensive discussion of why targeted strikes against Americans does not violate constitutional protections afforded American citizens as well as   a U.S. law that criminalizes the killing of U.S. nationals overseas.

It  also discusses why such targeted killings would not be a war crime or violate a U.S. executive order banning assassinations.

“A lawful killing in self-defense is not an assassination,” the white paper reads. “In the Department’s view, a lethal operation conducted against a U.S. citizen whose conduct poses an imminent threat of violent attack against the United States would be a legitimate act of national self-defense that would not violate the assassination ban. Similarly,  the use of lethal force, consistent with the laws of war, against an individual who is a legitimate military target would be lawful and would not violate the assassination ban.”