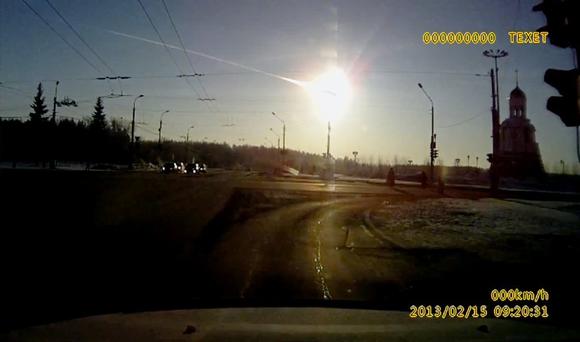 By Monte MorinThis post has been updated, as indicated below.

At a news conference Friday, NASA scientists said the object that exploded over Russia was a “tiny asteroid” that measured roughly 45 feet across, weighed about 10,000 tons and traveled about 40,000 mph.

The object vaporized roughly 15 miles above the surface of the Earth, causing a shock wave that triggered the global network of listening devices that was  established to detect nuclear test explosions.

The force of the explosion measured between 300 and 500 kilotons, equivalent to a modern nuclear bomb, according to Bill Cooke, head of the Meteoroid Environment Office at NASA’s Marshall Space Flight Center in Huntsville, Ala.
“When you hear about injuries, those are undoubtedly due to the events of the shock striking the city and causing walls to collapse and glass to fly, not due to fragments striking the ground,” Cooke said.
Scientists believe the object originated from the asteroid belt, a vast collection of debris orbiting between Mars and Jupiter that consists of leftover bits from the formation of the solar system. The asteroid probably traveled for a year before it burst into the atmosphere Friday. As yet, no fragments have been recovered, but experts believe the asteroid was rocky in nature, and not formed of dense iron and nickel.
The fact that the asteroid hit on the same day that the world was anticipating the close flyby of a larger asteroid, 2012 DA14, was an extraordinary coincidence. The smaller asteroid was traveling in a very different trajectory and much more quickly than DA14, indicating they were not related, according to Paul Chodas, research scientist in the Near-Earth Object Program office at NASA’s Jet Propulsion Laboratory in La Cañada Flintridge.
“I would call this a tiny asteroid,” Chodas said. ”This is the largest recorded event since the Tunguska explosion in 1908.” That event, which may have involved a meteor, leveled more than 800 square miles of forest in Russia.
Asteroids are tracked by telescope, as they are too far away to be detected by radar. Because of this, they are observable only when illuminated by the sun against a dark background. If they are small and dark-colored, they are far more difficult to observe. In the case of the Russian asteroid, it approached Earth with the sun behind it.
“The reason it wasn’t detected by telescopes on Earth is because it literally came out of the daylight sky and, as you know, telescopes can’t see things in the daytime,” Cooke said.
Scientists estimate that anywhere between 80 and 200 tons of space-borne debris hits Earth’s atmosphere every day. Most of those objects are the size of a grain of sand. Objects that contact the Earth’s surface are much rarer.
NASA leads international efforts to track much larger, asteroid-size objects, and Chodas said the agency had identified 95% of them. It’s the smaller ones that pose a problem. “They are very difficult to find,” he said.

[Updated, 6:30 p.m. Feb. 15: An earlier version of this post said that NASA had estimated the size of the object to be at least 7,000 tons, which it later revised to  about 10,000 tons. This version also clarifies that the force of the explosion was roughly equivalent to a modern nuclear bomb, much larger than the weapons that exploded in Hiroshima and Nagasaki, Japan, in 1945.]

One thought on “Russian ‘meteor’ was actually a tiny asteroid, NASA says”