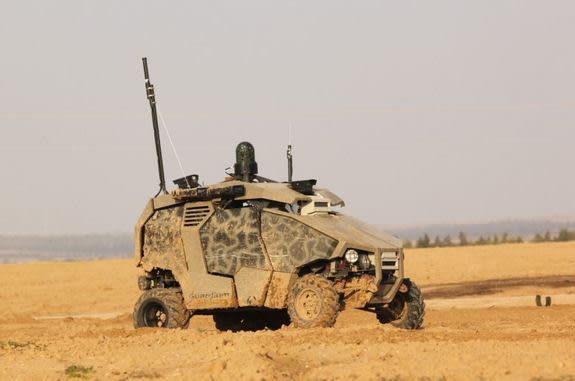 BEERSHEBA, Israel — Along Israel’s borders, a small number of automobiles patrol the area for signs of intruders. But unlike most vehicles, these cars have no drivers, and — for the most part —drive themselves.

Introduced in 2008, about eight to 10 autonomous cars have been patrolling Israeli borders, said Hugo Guterman, a researcher atBen-Gurion University of the Negev. Guterman helped develop thecomputer system that controls the cars, although the research was funded by Israel’s Ministry of Defense, and a company named G-NIUS produces the cars.

Guterman recently showed off a prototype called the Tomcar to reporters that he says works much like the cars that are currently patrolling the borders. The Tomcar uses several cameras to view its surroundings, as well as lasers and radar to avoid hitting obstacles, and is controlled by a three-tiered computer program, Guterman said. The lowest level actually controls the car, turning the steering wheel, braking or accelerating. The medium level uses GPS to navigate the terrain, and gathers information from its cameras and sensors. The highest level takes this information and “decides” what to do, especially when surprises arise, Guterman explained.

These cars have taken the place of some soldiers on the front lines, preventing them from possibly facing gunfire or confrontations. “By removing the people from the front line, actually you are saving lives,” Guterman said.

When asked if the vehicles are outfitted with weapons, Guterman said, “No comment.”

The computer system used by the autonomous cars is designed to act like two people.  “One is the driver and the other is looking around, and they’re connected to one another,” Guterman said. The midlevel processing systems that gather data from surveillance cameras works with the upper-level systems to decide whether or not to stop and check out something suspicious, he added.

The cars are usually fully autonomous, running on their own after being programmed to patrol in a certain area, said Gabi Davidson, vice president of marketing at G-NIUS. Occasionally, however, they require further input from remote operators, such as when they run into an unforeseen obstacles or scenario, he added.

For the most part, Israel’s self-driving cars patrol border areas where nobody lives, so there is little risk of unexpected encounters with peaceful civilians, said Dan Blumberg, Guterman’s colleague and a researcher at Ben-Gurion University. The car isn’t licensed to drive on heavily trafficked roads, however, “even if it drives better than Israeli drivers,” Guterman joked.

Guterman said his group is working to test the computer system on autonomous vehicles to help clear snow from urban streets in other countries. That project hit a roadblock, however, when the labor union in one of the cities where it was to be tested balked at the idea.

The car works similarly to Google’s driverless car prototype, except it’s better, Guterman said, since it doesn’t require a passenger to sit in it at all times, as is the case for the tech company’s vehicle.

Guterman isn’t involved in the production of the cars that patrol the border, and hasn’t worked on the models that are currently deployed since 2008, he said.