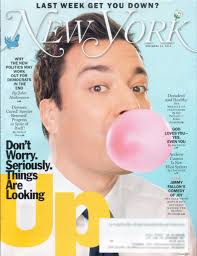 Budget documents state that ‘a talk or variety program’ that gets the credit ‘must be filmed before a studio audience’ of at least 200, have a production budget of at least $30 million or run at least $10 million in capital expenses — and has to have been shot outside New York for at least 5 seasons prior to relocation.

Quietly tucked into tentative state budget is a provision that would help NBC move “The Tonight Show” back to New York, the Daily News has learned.

The provision would make state tax credits available for the producers of “a talk or variety program that filmed at least five seasons outside the state prior to its first relocated season in New York,” budget documents show.

The state’s tax credit for movies filmed in New York is to include for the first time certain television shows. And not just any shows, but “a talk or variety program that filmed at least five seasons outside the state prior to its first relocated season in New York,” according to budget documents.

In addition, the episodes “must be filmed before a studio audience” of at least 200 people and the program must have an annual production budget of at least $30 million or incur at least $10 million a year in capital expenses.

In other words, a program exactly like “The Tonight Show.”

The iconic program is not identified by name in the documents, but reports are circulating that NBC is preparing to replace host Jay Leno with Fallon and move the granddaddy of late-night TV shows back to New York, which it left in 1972.

RELATED: JAY LENO BITES THE HAND THAT FEEDS HIM

Said one Cuomo aide, “This is simply part of our ongoing effort to attract more entertainment to the state and more economic activity.”

NBC is building Fallon a new studio at 30 Rockefeller Plaza — but it has not announced that it will relocate “The Tonight Show” from California.

New York already gives companies producing movies or television series in the state a tax credit equal to 30% of production costs. It costs the state $420 million in revenue a year.

But under current law, only shows that start up in New York are eligible for the taxcredit — not shows that relocate to the state.

NBC confirmed Wednesday, March 20, that it’s creating a new studio for Fallon in New York, where he hosts “Late Night.”

Details of the budget provision were first reported on nydailynews.com.

Aides to Gov. Cuomo denied Thursday that the new provision was written specifically with “The Tonight Show” in mind.

“It’s meant to attract shows to New York that are currently in other states that can generate economic revenue and tourism,” said one Cuomo aide.

The tentative budget provision comes on the heels of rumors that Jimmy Fallon is set to replace Jay Leno on “The Tonight Show.”

The aide said there is no deal between NBC and the state for a “Tonight Show” tax credit at this time.

The aide said NBC has not even confirmed it is moving the show back to New York.

“This is simply part of our ongoing effort to attract more entertainment to the state and more economic activity,” he insisted.

Under the tentative budget, which was hammered out by legislative leaders and Gov. Cuomo this week, the entire film and television tax credit program would be extended through 2019.

The program helped attract the makers of “The Amazing Spider-Man 2,” which has begun production in Brooklyn and Long Island and is expected to be the biggest movie ever to be made in the state.