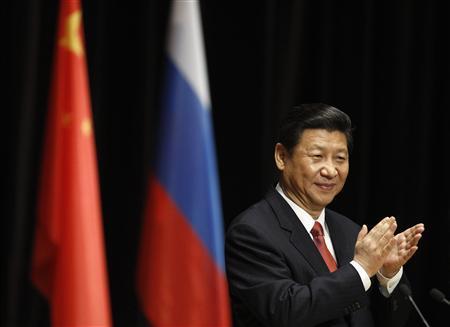 (Reuters) – Chinese President Xi Jinping warned against foreign interference in the affairs of other nations during a speech in Moscow on Saturday, sending a signal to the West and echoing a message often repeated by Russian President Vladimir Putin.

Permanent U.N. Security Council members with veto power, Russia andChina have frequently teamed up diplomatically to blunt the influence of the United States and its NATO allies and have blocked three draft resolutions on Syria.

“We must respect the right of each country in the world to independently choose its path of development and oppose interference in the internal affairs of other countries,” Xi told students at an international relations school.

He spoke a day after meeting Putin on his first foreign trip since becoming president, a choice both said underscored a “strategic partnership” between Russia and China. In the Kremlin, he told Putin: “you and I are good friends.”

Xi told Russian students on Saturday: “Strong Chinese-Russian relations … not only answer to our interests but also serve as an important, reliable guarantee of an international strategic balance and peace.”

Putin, who began a six-year term last May, has often criticized foreign interference in sovereign states.

Russia and China have resisted Western calls to pressure Syrian President Bashar al-Assad over the two-year-old civil conflict that has killed more than 70,000 people.

They both criticized the NATO bombing that helped rebels overthrow Libyan leader Muammar Gaddafi in 2011 and stood together in the Security Council in votes on the Iranian and North Korean nuclear programs.

Both China and Russia have bristled at U.S. and European criticism of their human rights records.

Putin said in a foreign policy decree issued at the start of his new term that Russia would counter attempts to use human rights as a pretext for interference, and his government has cracked down on foreign-funded non-governmental organizations.

Xi told Prime Minister Dmitry Medvedev his visit had “surpassed my expectations” and said he had chosen Russia as his first foreign destination as president to “show the special importance of our relations.”

Despite the warm words, Moscow is concerned that its far more populous, faster-growing neighbor could pose a threat, something that has not made for easy deals between the world’s biggest energy producer, Russia, and its biggest consumer, China.

Xi’s visit produced an agreement for Russian state giant Rosneft to gradually treble oil supplies to China, but the sides are still short of a deal on the supply of pipeline gas to China, thwarted for years over prices.

Viktor Yaskov, a student who attended Xi’s address, said the Chinese leader made “a good impression”, but expressed fears about the neighbor. “We’re worried about Chinese economic expansion,” he said.

Xi arrived in Moscow with glamorous first lady Peng Liyuan, prompting speculation about whether Putin’s wife Lyudmila – last seen at a state event last May – would make an appearance.

That did not happen, and Peng kept a low profile after her first steps off the airplane caused an Internet sensation in China.

After Russia, Xi will visit Tanzania, the Republic of Congo and South Africa, where he and Putin are expected to meet again at a summit of the BRICS group of emerging economies next week.