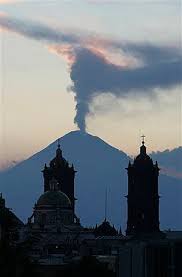 MEXICO CITY — Mexican officials are preparing evacuation routes and shelters for tens of thousands of people who live in the shadow of Popocatepetl, a giant volcano 40 miles southeast of Mexico City.

“Popo,” as the volcano is known, has displayed a “notable increase in activity levels” in the last few days, including tremors and explosive eruptions, according to a statement from the federal government.

Webcams have shown large chunks of molten rock spewing from the crater, and ash has rained down on the nearby city of Puebla. On Sunday, Mexico’s National Center for Disaster Prevention elevated its warning level to “Yellow Phase 3,” the fifth stage of a seven-stage warning scale.

At the next stage, the government warns, “there is danger. You and your family should be ready for evacuation.”

The 17,887-foot Popocatepetl, which means “smoking mountain” in the Aztec language Nahuatl, dominates much of the landscape in central Mexico, along with its nearby “twin” volcano, the dormant Iztaccihuatl.

There have been moderate outbursts from Popo in recent years, forcing the government to evacuate as many as 75,000 people at a time.