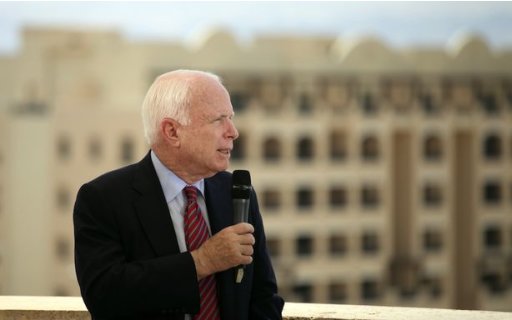 Sen. John McCain (R) traveled to war-torn Syria on Monday to meet with rebel leaders, a spokesman for the Arizona senator confirmed to The Hill.

McCain’s visit makes him the highest-ranking U.S. official to enter the country since its civil war began two years ago.

According to the Daily Beast, which first reported the visit, McCain met with Gen. Salem Idris, the leader of the Supreme Military Council of the Free Syrian Army, and spent a few hours in the country after entering through Turkey.

McCain, a leading critic of the Obama administration’s policy towards Syria, has been calling for the U.S. to provide lethal aid to opposition forces seeking the ouster of Syrian President Bashar al-Assad.

The administration has resisted calls from lawmakers to arm the rebels over fears those weapons could fall into the hands of Islamist or anti-U.S. elements. Many Syrian rebel groups have been linked to al Qaeda and other terrorist groups.

Last week, however, the Senate Foreign Relations Committee approved a bill to arm the Syrian opposition, a bipartisan rebuke to the White House.

Supporters of the measure say it is necessary to help end a conflict which has already claimed 80,000 lives, according to some estimates.

The White House, though, has continued to focus on a diplomatic solution to ease Assad from power.

Secretary of State John Kerry will meet his Russian counterpart on Monday in Paris to discuss efforts to further peace talks. Russia, one of Syria’s staunchest allies, has blocked past attempts in the past to pressure Damascus.

Kerry is also pushing Syrian opposition leaders to negotiate with Assad’s regime during an international conference scheduled for June.

According to reports, rebel leaders asked McCain for heavy weapons from the U.S., as well as a no fly zone to limit attacks from the Syrian air force.

Rebel leaders also told McCain that Assad’s troops had used chemical weapons in the war, a move which would cross a “red line” for President Obama.

The administration has said it is continuing to investigate prior allegations of chemical weapons use.