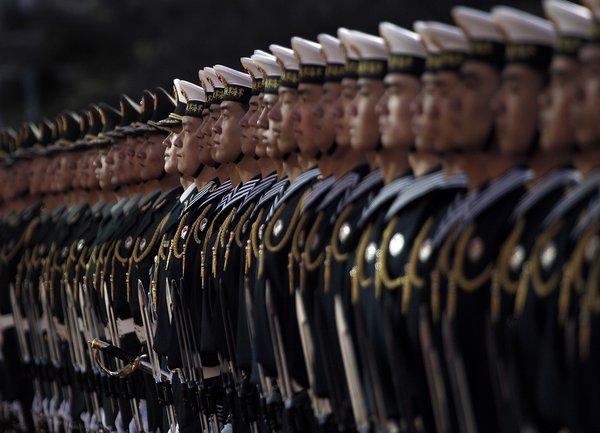 This spring, China’s navy accepted the Pentagon‘s invitation to participate in the 2014 Rim of the Pacific — RIMPAC — naval exercise to be held off Hawaii. This will be the first time China takes part in the biennial event.

Our allies should signal their intent to withdraw from the exercise if China participates. Failing that, the invitation should be withdrawn. RIMPAC is for allies and friends, not nations planning to eventually wage war on the United States. Russia sent ships in 2012, but while its senior officers may occasionally utter unfriendly words, they are not actively planning to fight the United States. Analyst Robert Sutter was surely correct when he wrote in 2005 that “China is the only large power in the world preparing to shoot Americans.”

That assessment, unfortunately, remains true today. Beijing is configuring its forces — especially its navy — to fight ours. For instance, China has deployed along its southern coast its DF-21D, a two-stage solid-fuel missile that can be guided by satellite signals. The missile is dubbed the “carrier killer” because it can be configured to explode in midair, raining down sharp metal on a deck crowded with planes, ordinance, fuel and sailors. Its apparent intent is to drive U.S. forces out of East Asia.

A pattern of aggressive Chinese tactics also points in that direction. Especially troubling is the harassment in international waters of unarmed U.S. Navy reconnaissance vessels for more than a decade, most notably the blocking of the Impeccable in the South China Sea in 2009. And there was the 2001 downing of a Navy EP-3 and the surfacing of a Song-class attack submarine in the middle of the Kitty Hawk strike group near Okinawa in 2006.

Since then, we have been hearing bold war talk in the Chinese capital, from new leader Xi Jinping to senior officers and colonels who say they relish combat — a “hand-to-hand fight with the U.S.,” as one of them put it in 2010.

Why do China’s officers want to go to war? There is an unfortunate confluence of factors. First, there is a new Chinese confidence bordering on arrogance. Beijing leaders, especially since 2008, have been riding high. They saw economic turmoil around the world and thought the century was theirs to dominate. The U.S. and the rest of the West, they believed, were in terminal decline.

The Chinese military also has gained substantial influence in the last year, perhaps becoming the most powerful faction in the Communist Party. Beginning as early as 2003, senior officers of the People’s Liberation Army were drawn into civilian power struggles as Hu Jintao, then the new leader, sought their support in his effort to shove aside Jiang Zemin, his wily predecessor who sought to linger in the limelight. Last year, the civilian infighting intensified as the so-called Fifth Generation leadership, under the command of Xi, took over from Hu’s Fourth. Like a decade ago, feuding civilians sought the support of the generals and admirals, making them arbiters in the party’s increasingly rough game of politics.

The result of discord among civilian leaders has been a partial remilitarization of politics and policy. Senior officers are now acting independently of civilian officials, are openly criticizing them and are making pronouncements in areas once considered the exclusive province of diplomats.

The remilitarization has had consequences. As Huang Jing of Singapore’s Lee Kuan Yew School of Public Policy said: “China’s military spending is growing so fast that it has overtaken strategy. The young officers are taking control of strategy, and it is like young officers in Japan in the 1930s. They are thinking what they can do, not what they should do.”

What do China’s admirals want? They are supporting their nation’s territorial ambitions to close off the South China Sea to others. This brings them into conflict with nations surrounding that critical body of water and pits them against the U.S. If there has been any consistent U.S. foreign policy over the course of two centuries, it has been the defense of freedom of navigation.

According to a white paper it issued in April, China is building a navy capable of operating in the ocean’s deep water, and has 235,000 officers and sailors. Its navy last year commissioned its first aircraft carrier, and it is reportedly building two more. China has about a dozen fewer submarines than the U.S., but the U.S. has global responsibilities. The Chinese, therefore, can concentrate their boats in waters close to their shores, giving them tactical and operating advantages.

While the Chinese plan to dominate their waters and eventually ours, we are helping them increase their effectiveness with invitations to RIMPAC and other exercises and by including them in joint operations like the one directed against Somali piracy. The U.S. Navy at the same time is continuing to reduce its fleet, currently at 283 deployable ships. As Beijing’s behavior has become more troubling, the Pentagon has clung to the hope that military-to-military relations will somehow relieve tensions with the Chinese.

Yet as Ronald Reagan taught us, the nature of regimes matter. We are now helping an incurably aggressive state develop its military — to our peril. There is something very wrong at the core of the Obama administration’s and the Pentagon’s China policies.