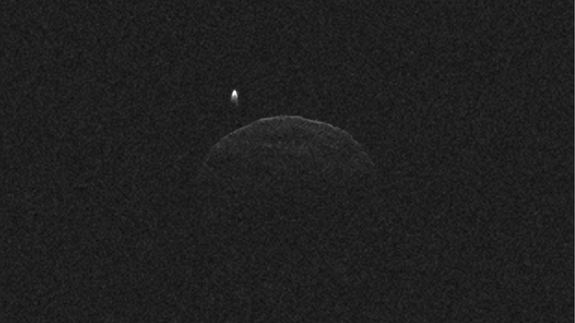 A newly released video of a giant asteroid’s Earth flyby last week reveals key details about the enigmatic space rock and its attendantmoon.

The enormous asteroid 1998 QE2 sailed past our planet at a distance of 3.6 million miles (5.8 million kilometers) on May 31, making its closest approach for at least the next two centuries.

The new video stitches together 55 images captured by the Goldstone facility on June 1, when theasteroid was about 3.75 million miles (6 million km) from Earth. Its resolution is about 125 feet (38 m) per pixel, researchers said.

This moon completes one orbit every 32 hours, researchers said, and it apparently shows only one face to the larger body (just as Earth’s moon always shows us its near side). The maximum distance between 1998 QE2 and its moon is about 4 miles (6.4 km).

Asteroid 1998 QE2 completes one rotation about its axis every five hours or so. It’s one of the largest and slowest-spinning binary space rocks that radar instruments have ever observed, scientists said.

Multi-asteroid systems like 1998 QE2 aren’t terribly uncommon. About one of every six near-Earth asteroids at least 655 feet (200 m) wide is actually a binary or triple system.

Asteroid 1998 QE2 was discovered in August 1998 by astronomers working with MIT’s Lincoln Near Earth Asteroid Research program in New Mexico. It’s one of 10,000 or so close-flying asteroids that have been spotted to date, out of a total population that likely numbers at least 1 million.

There was never any danger of 1998 QE2 hitting Earth on last week’s flyby, researchers said. That’s a good thing, because a strike by such a large space rock would be catastrophic. Any asteroid more than 0.6 miles (1 km) wide is thought to be capable of inflicting damage on a global scale, primarily by altering the planet’s climate.

Astronomers plan to continue studying 1998 QE2 with the Goldstone and Arecibo dishes until Sunday (June 9), NASA officials have said.