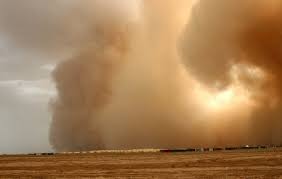 Twenty-seven vehicles slammed into each other during a sandstorm that blinded drivers on Interstate 80 in rural northern Nevada, killing a truck driver, seriously injuring several other people and sapping already thin emergency resources, officials said.

Humboldt County sheriff’s dispatchers called in virtually every medical, law enforcement and fire worker in the sparsely populated area after drivers reported “near-apocalyptic” conditions Monday evening on I-80 at Winnemucca, according to officials at Humboldt General Hospital there. A mine rescue crew also assisted, while a charter bus helped transport victims.

The pileup shut down the east-west corridor, a major trucking route, in both directions while workers cleared the scene of wrecked vehicles and debris. One side reopened after 19 hours, while the other remained closed early Tuesday afternoon.

Chicago resident Ravi Dyer, 51, was killed when his truck rear-ended another commercial vehicle in the zero-visibility conditions, according to the Nevada Highway Patrol. Two other trucks hit his from behind, seriously injuring his passenger.

Humboldt General Hospital spokeswoman Nicole Maher said 26 people were treated at the hospital, including three in critical condition who were later transferred to a hospital in much-larger Reno, about 160 miles away.

High winds at about 5 p.m. Monday whipped up dust — possibly loose from recently cleared fields — and created whiteout-like conditions, authorities said. Vehicles, including semitrailers, passenger cars and a tow truck piled up in both directions.

Images from the scene showed crunched-up vehicles, at least one overturned SUV, and damaged big rigs with their loads spilling onto the road. Maher said Tuesday that it took about 3 1/2 hours to extricate one person from a vehicle.

A mine rescue crew from Newmont Mining Corp. assisted, Maher said, along with the entire emergency room and operating room teams at the 52-bed Winnemucca hospital.