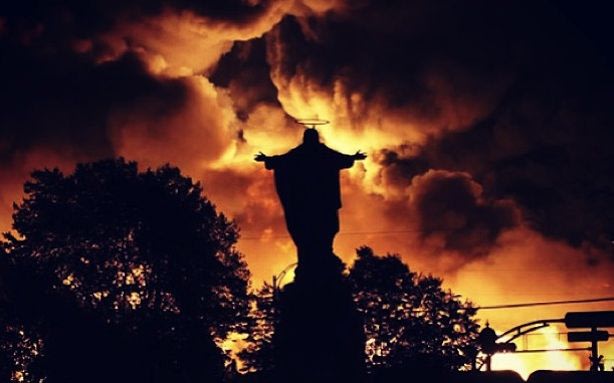 Fires raged well into Saturday afternoon in Quebec after a train carrying petroleum products derailed and decimated a small town, causing damage to over 30 buildings and forcing residents out of their homes. The Globe and Mail reports over 1,000 people were evacuated after the crash.  NBC News reports police have set up a half-mile perimeter around the site where several tankers went off the tracks and crashed in Lac Mégantic, Quebec, around 1 a.m. Saturday morning. The Montreal, Maine & Atlantic freight train travelling to Maine crashed in the small border town, and the ensuing explosions destroyed huge portions of downtown. There are no reported injuries, but some people are still missing as the town goes searching for answers.

The pictures and videos that surfaced showing the intensity of the blaze are terrifying. The photo above, showing a Jesus statue watching over the town as as the sun was rising over raging flames, circulated widelySaturday morning. The videos showing multiple explosions happening are straight out of a Hollywood effects.