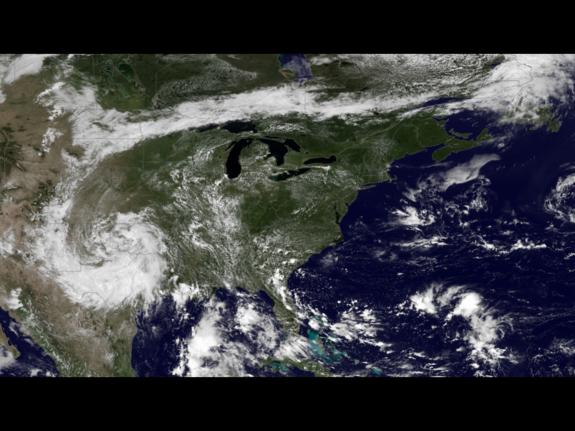 The U.S. East Coast is sweating through a lingering heat wave this week. The sweltering heat and humidity have combined to keep temperatures hot even at night. But relief may finally be in sight.

Today and Friday are expected to be the hottest days of the Northeast’s extended heat wave, according to the NWS’ Eastern Region Headquarters.

A giant high-pressure dome in the atmosphere, sitting over the Ohio Valley, is keeping the East Coast hot and humid. The high pressure blocks the jet stream’s cooler air from reaching the region and, at the same time, pulls in hot, humid air from the Gulf of Mexico. The high pressure also keeps the skies clear, helping to raise temperatures, as can be seen from space in an image captured by the GOES East satellite.

However, an end is in sight: A cold front will come through starting Friday, bringing relief first to the Ohio Valley and Great Lakes and then finally to the Northeast by Sunday, the NWS said. But the collision between cold and warm air could cause thunderstorms and heavy rainfall in the Appalachians and the Carolinas next week, the NWS said.