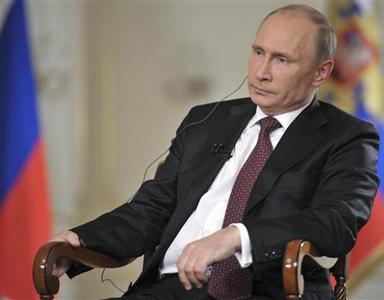 (Reuters) – Russian President Vladimir Putin saidRussia did not rule out approving a military operation in Syria if clear evidence showed Damascus had carried out chemical weapons attacks, but said any attack would be illegal without U.N. support.

In an interview with AP and Russia’s First Channel, released the day before a G20 leaders’ meeting in St Petersburg, Putin said he expected to hold talks with the U.S. President Barack Obama on the summit sidelines, saying there was much to discuss.

Ties between the United States and Russia have fallen to one of their lowest points since the end of the Cold War over numerous issues including violence in Syria, where Russia has been President Bashar al-Assad’s most powerful protector.

Putin’s comments appeared intended to show readiness to remain constructive in U.S.-Russia ties, despite Obama’s decision to pull out of a bilateral summit between the leaders.

Obama comes to St Petersburg having secured support from key figures in the U.S. Congress for his call for limited U.S. strikes on Syria.

When asked whether Russia would agree to military action if Damascus were proven to have carried out a chemical weapons attack, Putin answered: “I do not rule it out.”

However, he also made clear that Russia is not yet prepared to accept U.S. and European assertions that Assad’s forces were behind an August 21 chemical weapons attack that Washington says killed more than 1,400 people.

Putin said no strikes on Syria could be legal without approval by the United Nations Security Council, where Moscow has a veto that it has repeatedly used to protect Assad.

The United States and France, its main ally on Syria, say they are prepared to launch strikes without a U.N. Security Council resolution because they believe Moscow would veto any authorization for force.

A senior Western official said that – while Moscow was unlikely to say so in public – there were signs Russian officials believe Assad was indeed responsible for the chemical weapons attack and it had strained Russian support for him.

Western countries are hoping that once any military strikes are finished, probably over Russia’s public objections, Moscow will be more cooperative than in the past in seeking a political solution, the official said.

Foreign ministers will also attend the G20 summit and will meet to discuss Syria.

Looking confident and relaxed, Putin said the burden was on other countries to convince Moscow Assad had used chemical arms. Russia has previously said it suspects rebels were behind the attack to provoke a U.S. military response. Putin said there was an “opinion” al Qaeda-linked rebels were to blame.

He also said that Moscow had already sent to Syria some components of an S-300 missile system but was holding off on the delivery of final parts, something Putin threatened could happen if “existing international norms” were violated.

Western governments are concerned about the S-300 surface-to-air system, which could be used against their planes.

“We have supplied separate components, but the whole delivery is not finalized; we have suspended it for now. But if we see steps being undertaken that would violate existing international norms, we will think how to move forward, including on deliveries of such sensitive weapons,” Putin said.

Regarding his relationship with Obama, Putin called the U.S. leader “a no-nonsense, practical person,” and tried to dispel speculation that body language between the two leaders belied poor personal relations.

After cancelling a bilateral summit with Putin last month Obama said the Russian leader’s slouch can sometimes make him look “like the bored kid in the back of the classroom” but that his conversations with Putin were often constructive.

Obama had pulled out of the meeting with Putin, scheduled for before the G20 summit, after Russia granted temporary asylum to fugitive former U.S. spy contractor Edward Snowden, wanted by the United States for leaking information about surveillance programs. Putin said he still hoped to talk with Obama.

“I’m sure that even if we hold a meeting… on the sidelines of the summit, it will be useful in itself. In any case, we have many issues that we have been working on and we are interested in settling them,” he said.