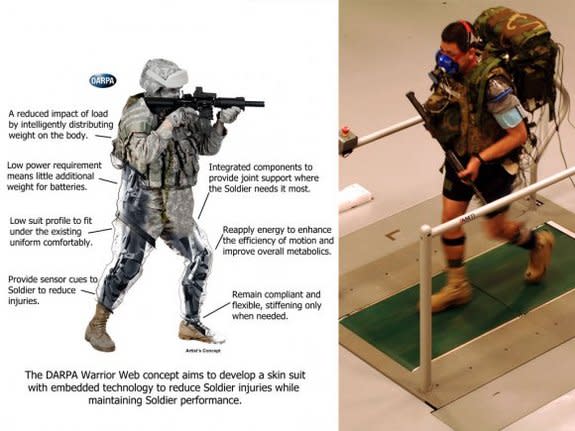 If you’ve always wanted a high-tech suit of armor that will make you nearly invincible — à la Tony Stark of “Iron Man” — your long wait may soon be over.

Researchers at the Massachusetts Institute of Technology, the U.S. Army Research, Development and Engineering Command (RDECOM) and other groups from business and academia are joining forces to create a Tactical Assault Light Operator Suit, or TALOS, that “promises to provide superhuman strength with greater ballistic protection,” according to a statement released by the U.S. Army.

The most amazing features of the suit include integrated 360-degree cameras not unlike Google Glass (but with night vision capabilities), sensors that can detect injuries and apply a wound-sealing foam, and — get ready for this — a bulletproof exoskeleton made of magnetorheological fluids that can change from liquid to solid in milliseconds when a magnetic field or electrical current is applied. [Bionic Humans: Top 10 Technologies]

If it all reminds you of the liquid-metal shapeshifter T-1000 from “Terminator” or some other sci-fi character, you’re not alone. “It sounds exactly like ‘Iron Man,'” Gareth McKinley, a professor at MIT, told NPR. “The other kind of things that you see in the movies I think that would be more realistic at the moment would be the kind of external suit that Sigourney Weaver wears in ‘Aliens,‘ where it’s a large robot that amplifies the motions and lifting capability of a human.”

Not everyone, however, is enamored with the super-advanced gizmos being proposed for the soldiers of tomorrow. “My sense is it is an up-armored Pinocchio,” Scott Neil, a retired special forces master sergeant and Silver Star recipient, told the Tampa Tribune. “Now the commander can shove a monkey in a suit and ask us to survive a machine gun, IED [improvised explosive device] and poor intelligence all on the same objective. And when you die in it, as it melds to your body, you can bury them in it.”

Even believers in the TALOS suit acknowledge its limitations. “The acronym TALOS was chosen deliberately,” McKinley said. “It’s the name of the bronze armored giant from ‘Jason and the Argonauts.’ Like all good superheroes, Talos has one weakness. For the Army’s TALOS, the weak spot is either the need to carry around a heavy pump for a hydraulic system, or lots of heavy batteries. We don’t have Iron Man’s power source yet.”

For would-be sci-fi superheroes who are ready for their very own TALOS, the wait may prove excruciating: Though various components of the suit are currently in development, the Army hopes to have a prototype ready next year, and an advanced model won’t be developed until at least two years after that.