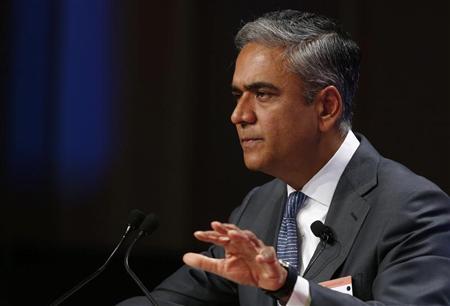 (Reuters) – Three of the world’s most powerful bankers warned of terrible consequences if the United States defaults on its debt, with Deutsche Bank chief executive Anshu Jain claiming default would be “utterly catastrophic.”

“This would be a very rapidly spreading, fatal disease,” Jain said on Saturday at a conference hosted by the Institute of International Finance in Washington.

“I have no recommendations for this audience…about putting band aids on a gaping wound,” he said.

Jain, JPMorgan Chase chief executive Jamie Dimon and Baudouin Prot, chairman of BNP Paribas, said a default would have dramatic consequences on the value of U.S. debt and the dollar, and likely would plunge the world into another recession.

The U.S. Treasury Department has said it expects to max out its borrowing authority next week and won’t be able to prioritize payments on U.S. debt over obligations like Social Security.

Lawmakers have seemed at an impasse over raising the debt limit. Democrats want to re-open federal agencies, which have been partially closed since funding ran out on October 1, and Republicans insist any debt ceiling deal includes plans to cut government spending.

Dimon and other top executives from major U.S. financial firms met with President Barack Obama and with lawmakers last week to urge them to deal with both issues.

On Saturday, Dimon said banks are already spending “huge amounts” of money preparing for the possibility of a default, which he said would threaten the global recovery after the 2007-2009 financial crisis.

“We need global growth,” he said. “We are on the verge of getting it. Please let’s not shoot ourselves in the foot.”

Dimon also defended JPMorgan against critics who say the bank has become too big to manage. It has come under scrutiny from numerous regulators and on Friday reported its first quarterly loss since Dimon took over, due to more than $7 billion in legal expenses.