Geneva (AFP) – Iran agreed to curb its nuclear programme in a breakthrough deal Sunday that world powers claimed was the biggest step in decade-long efforts to deny Tehran an atomic bomb.

Tehran boasted that the agreement, which offers Iran limited sanctions relief, recognised its right to enrich uranium, but Washington denied it made any such reference as differences remained after the arduous Geneva talks.

Israel however slammed the deal as an “historic mistake” failing to ensure the Islamic republic will not seek to acquire nuclear weapons.

The six world powers involved in the marathon talks however hailed the preliminary agreement, which seemed unthinkable only a few months ago and at least temporarily warded off the prospect of military escalation.

“Today, the United States together with our close allies and partners took an important first step toward a comprehensive solution that addresses our concerns with the Islamic Republic of Iran’s nuclear programme,” US President Barack Obama said.

Under the deal between Iran and the five permanent members of the UN Security Council plus Germany announced at 3:00 am Geneva time (0200 GMT), Tehran will limit uranium enrichment — the area that raises most suspicions over Iran’s alleged nuclear weapons drive — to low levels. 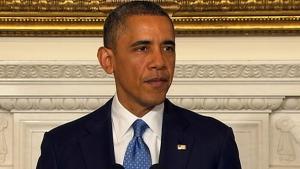 It will neutralise its entire stockpile of uranium enriched to medium 20-percent purities — close to weapons-grade — within six months, US Secretary of State John Kerry said in Geneva, where he and other foreign ministers helped nail down the deal.

Iran will also not add to its stockpile of low-enriched uranium, nor install more centrifuges or commission the Arak reactor.

In exchange the deal will afford the Islamic republic some $7 billion (5.2 billion euros) in sanctions relief and the powers promised to impose no new embargo measures for six months if Tehran sticks by the accord.

This represents “limited, temporary, targeted, and reversible relief while maintaining the vast bulk of our sanctions, including the oil, finance, and banking sanctions architecture,” the White House said.

Hassan Rouhani, whose election as Iran’s president in June raised hopes of a thaw with the West, insisted “Iran’s right to uranium enrichment on its soil was accepted in this nuclear deal by world powers.”

But Kerry was adamant: “This first step does not say that Iran has the right of enrichment, no matter what interpretative comments are made.”

Iranian Foreign Minister Javad Zarif said the recognition was implicit, as diplomats who were at loggerheads only hours earlier tried to sell the deal to their domestic audiences.

Russia said there were only winners and no losers in the deal, while Iran’s other ally China said the Geneva document will support stability in the Middle East.

France, the member of the so-called P5+1 group that had expressed the most reservations over Iran’s commitment in a previous round of talks, said Sunday’s deal was a “step in the right direction.”

Over the next six months, Iran and the United States, China, Russia, France, Britain and Germany are to negotiate a more comprehensive deal.

Joel Rubin, director of policy for the foundation Ploughshares Fund warned that the hardest work may still lie ahead.

“This is going to challenge all of the feelings, and conceptions and ideologies and emotions that have been pent up in the US, in the West and in Israel and elsewhere for decades. It’s going to be a very, very hard task,” he said.

Sanctions have ‘begun to crack’

The deal was reached at the third meeting of the P5+1 and Iran since Rouhani, seen as a relative moderate, replaced the more hawkish Mahmoud Ahmadinejad in August saying he was ready for “serious” negotiations “without wasting time”.

Iranians, many of whom see the nuclear programme as a source of national pride, are impatient to see a lifting of sanctions that have more than halved Iran’s vital oil exports since mid-2012 and hit the economy hard.

“The structure of the sanctions against Iran has begun to crack,” Rouhani said after the Geneva signing.

The Jewish state virulently criticised the agreement, with Prime Minister Benjamin Netanyahu telling his cabinet that “what was achieved… in Geneva is not a historic agreement but rather a historic mistake.”

Foreign Minister Avigdor Lieberman argued the world effectively granted Tehran the right to enrich uranium and called the outcome of the talks “the greatest diplomatic victory of Iran.”

Many in Israel strongly believe that the only aim of Iran — an ally of Hezbollah and embattled Syrian President Bashar al-Assad — is to develop a nuclear arsenal with which to threaten their country.

Netanyahu wants all of Iran’s nuclear facilities dismantled for good, not some of them temporarily, believing nothing short of this will prevent its arch foe going nuclear — as it is widely assumed to be itself.

Kerry said however that the deal extends the “breakout” time needed by Iran to develop nuclear weapons and thus “will make our partners in the region safer. It will make our ally Israel safer.”

Many hardliners in the United States agree that Obama, who in September held an historic phone call with Rouhani, is being too soft on Iran by negotiating with Tehran and striking this deal.

“Unfortunately, some members of Congress believe further US-mandated sanctions would improve the United States’ negotiating position in the next round of talks,” said Daryl Kimball of the Arms Control Association.