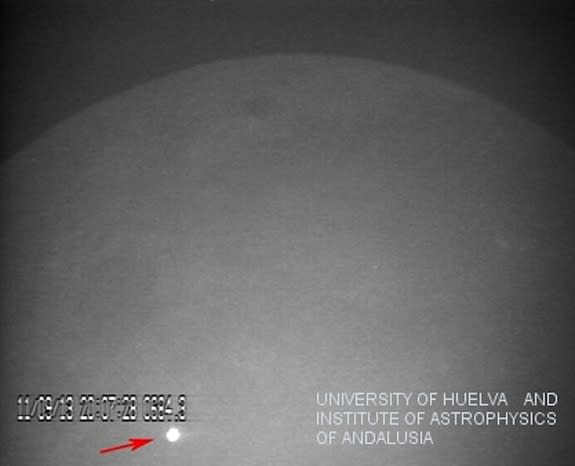 The high-speed impact of a wayward space rock on the surface of the moon last year triggered the brightest lunar explosion ever seen, scientists say.

Video footage of the record-breaking meteorite strike on the moon, which occurred on Sept. 11, 2013 and was unveiled today (Feb. 24), shows a long flash that was almost as bright as the North Star Polaris. That means the boulder-sized meteorite’s lunar crash could have been visible to anyone on Earth who happened to be staring up at the moon at 8:07 p.m. GMT, weather permitting.

“At that moment I realized that I had seen a very rare and extraordinary event,” Jose Madiedo, a professor at the University of Huelva, said in a statement. Madiedo witnessed the collision using two moon-watching telescopes in the south of Spain that are part of the Moon Impacts Detection and Analysis System, or MIDAS observatory. [The Greatest Moon Crashes of All Time]

If a space rock this size hit the Earth, it might create some spectacular fireball meteors, but it likely would not pose a threat to people on the ground, researchers explained. But the moon lacks an atmosphere like the one enshrouding our planet, making it quite vulnerable to incoming asteroids.

The energy released by the September 2013 impact was comparable to an explosion of roughly 15 tons of TNT. It was at least three times more powerful than the largest previously observed event — a powerful lunar explosion spotted by NASA scientists on March 17, 2013. During that crash, a space rock hit at an estimated 56,000 mph (90,000 km/h), carving a new crater 65 feet (20 meters) wide.

Typically, the flashes from these impacts last only a fraction of a second, but the bright spot seen by Madiedo glowed for eight seconds, making it the longest observed impact flash. Since 2005, NASA’s moon impact-monitoring program has observed more than 300 meteorite strikes on the lunar surface.

“Our telescopes will continue observing the moon as our meteor cameras monitor the Earth’s atmosphere,” Madiedo said in a statement. “In this way we expect to identify clusters of rocks that could give rise to common impact events on both planetary bodies. We also want to find out where the impacting bodies come from.”

The research on the September 2014 lunar impact was unveiled Sunday (Feb. 23) in the journal Monthly Notices of the Royal Astronomical Society.