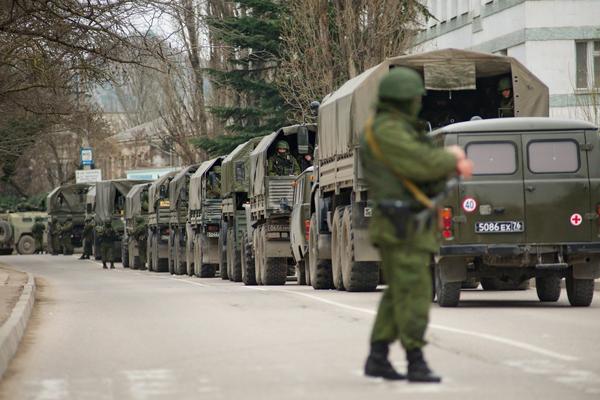 President Obama warned Russia on Monday of possible U.S. sanctions over its military land grab in Ukraine, but Moscow brushed aside international threats, tightening its stranglehold on Crimea and calling audaciously for a national unity government in Kiev.

In Washington, Mr. Obama said the world is “largely united” against Russia’s military action and he is considering economic and diplomatic steps that would gradually isolate Russia. He criticized the government of Russian President Vladimir Putin for being “on the wrong side of history.”

“What cannot be done is for Russia with impunity to put its soldiers on the ground and violate basic principles that are recognized around the world,” Mr. Obama said. “Over time, this will be a costly proposition for Russia.”

But the U.S. and European Union floundered for solutions — while global markets panicked over the prospect of violent upheaval in the heart of Europe. Fears grew that the Kremlin might carry out more land grabs in pro-Russian eastern Ukraine, or elsewhere in the former Soviet Union, adding urgency to Western efforts to defuse the crisis.

Secretary of State John F. Kerry was heading to Kiev in an expression of support for Ukraine’s sovereignty, and the EU threatened a raft of punitive measures as it called an emergency summit on Ukraine for Thursday. In Congress, lawmakers prepared to move on an aid package for Ukraine.
But it was Russia that appeared to be driving the agenda.

Foreign Minister Sergey Lavrov said in Geneva at the beginning of a U.N. Human Rights Council session that Ukraine should return to the Feb. 21 agreement signed by pro-Russian President Viktor Yanukovych — but not by Moscow — aimed at ending Ukraine’s governing crisis.

Mr. Yanukovych fled the country after sealing a pact with the domestic opposition — and with the foreign ministers of France, Germany and Poland — that called for early elections and the weakening of presidential powers.

“Instead of a promised national unity government,” Mr. Lavrov said, “a ‘government of the victors’ has been created.” He justified the Russian intervention in the Crimean peninsula as necessary for the protection of Russian citizens and ethnic Russians within Ukraine’s borders.

The U.S. ambassador to the U.N., Samantha Power, said Mr. Lavrov’s assertions were “without basis in reality.”

“What is happening today is a dangerous military intervention in Ukraine,” Ms. Power said. “It is an act of aggression. It must stop.”

The Pentagon said late Monday that it will suspend military exercises and other activities with Russia. Navy Rear Adm. John Kirby said the U.S. military has “put on hold” all military-to-military engagements, including bilateral meetings, port visits and planning conferences.

Meanwhile, Ukraine claimed that Russian troops had issued an ultimatum for two Ukrainian warships to surrender or be seized — prompting Ukraine’s acting president to accuse Russia of piracy.

Vladimir Anikin, a Russian Defense Ministry spokesman in Moscow, dismissed the report of a Russian ultimatum as nonsense but refused to elaborate.

It was not clear what the West could do to make Russia back down. The clearest weapon at the disposal of the EU and U.S. appeared to be economic sanctions that would freeze Russian assets and pull the plug on multibillion-dollar deals with the Kremlin. Late Monday, the EU threatened to freeze visa liberalization and economic cooperation talks and boycott the Group of Eight summit in Russia if Moscow does not back down on the Crimean peninsula by Thursday’s summit.