There’s an old saying in the military that we’re always training for the last war, so fixated on the lessons of our most recent conflict that we’re blind to the emerging threat.

For years, that last war was the Cold War, and the emerging threat was the insurgents of Iraq and Afghanistan. Slowly, painfully, eventually, the military reoriented itself. The result? After more than two decades of post Cold War re-alignment, the military is less prepared than it has been in generations for a confrontation with Russia.

No one in Washington is calling for the U.S. to go to war over Crimea and there are plenty of reasons why, at this point, military intervention could be a dangerous and foolhardy course. But if circumstances change and political leaders start looking to the military or the bargaining power that comes from a credible threat of force, they will find their options severely limited.

Over the course of the wars in Afghanistan and Iraq soldiers and marines have trained for maneuvering and fighting in small units over the landscape of the Middle East. Counter-insurgency (“COIN”) doctrine, which stresses engagement with local civilian populations and tactics for fighting loosely organized forces employing light weapons, has become the military’s new bible. It’s about as far away as you can get from the principles used in the Cold War.

According to retired General David Deptula, who served as the Air Force’s top intelligence officer, “we’ve been focused on the far left end of the spectrum of operations,” by which he means the protracted, low-intensity conflicts in Iraq and Afghanistan. But, he says, “if we want to maintain superpower status we need to be prepared to succeed across the full range of operations, not just the left end of it.”

Even the few strategists that weren’t pre-occupied by Iraq and Afghanistan were planning for the much-touted Asia pivot, envisioning a future, one they’d argue is still looming, defined by Chinese hegemony. Russia, meanwhile, was considered by many to be an historical relic; still big enough to wield real power but no longer capable of threatening U.S. vital interests and a second or third order afterthought when evaluating threats the military needed to plan for.

“For years there have been only a handful of people consistently talking about Russia and China building highly advanced systems for use against our ‘Cold-War era’ aircraft, missiles and ships,” Deptula says. 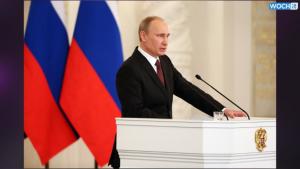 He’s talking about himself and some of his closest confidants at the Air Force, who pushed for continued production of high-end weaponry like the F-22 stealth fighter—right when the Iraq insurgency was at its peak. It made Deptula and his gang seem like Mach 2 dinosaurs, pining for a conflict with an imaginary enemy while the real bad guys were blowing up Marines in Fallujah. Understandably, Robert Gates, the Defense Secretary of the time, wanted the military to focus on the wars America was actually fighting at the moment. And so eventually, many of Deptula’s colleagues—including Gen. Michael “Buzz” Moseley, the Air Force’s top officer—were shown the door when they opposed Gates once too often. According to Deptula, “those people were ignored by [former Defense Secretary] Gates, and some were fired because they had the courage to speak truth to power.”

As the White House and Pentagon planners consider what to do if Russia invades Eastern Ukraine or deploys its forces elsewhere in the region, the limited choices available reveal just how profoundly the military has changed since the Cold War.

For half a century, Cold War military strategy focused on containing Russia and winning in clashes between large conventional forces. On the ground, that strategy called for mass formations organized around tanks and heavy weaponry. In the skies it relied on dominance in Top Gun style style air-to-air fighting prowess, radar evading stealth technology, and powerful bombers that could drop massive munitions to destroy enemy armor and fortified installations.

Since the end of the Cold War, that strategy has been completely overhauled. Training and doctrine have focused on small unit tactics while new weapons and vehicles have been designed with squads in mind rather than divisions. Super-sophisticated dogfighters, like the $187 million-a-pop F-22, suddenly seemed too fancy to actually use. Who would fit the bill if one actually went down? Instead, drones costing less than a tenth the price littered the skies over Afghanistan and Iraq.

But those drones are useless against any military with a half-decent system for shooting down enemy aircraft. And Russian has one of the best air defenses on the planet. Suddenly, it’s those iconic Predator drones that seem obsolete.

“Hopefully the situation with Russia and Ukraine will be a bucket of cold water on those who believe all we need to be able to do is counter-insurgency operations,” Deptula told The Daily Beast.

The Ukrainian ship Slavutich (C) is seen blocked by two Russian ships at the harbour in Sevastopol,  …

And now, there are signs that the U.S. Air Force’s long-held technological advantage may be eroding.

The new generation of Russian fighter plane, the T-50, isn’t yet fully operational but it “will be produced much sooner that Gates and his crowd predicted,” Deptula says. He adds that “once the T-50s are produced in sufficient numbers there won’t be anything in the NATO fleet that can deal with them except the F-22s and F-35s.”

David Axe, the long-time military tech writer notes that the T-50, which can fire long-range missiles while flying both high and fast, may be able to “exploit critical vulnerabilities in U.S. and allied forces and level the air power playing field for the first time in a generation.”

An independent Australian think tank, Air Power Australia, drew a more severe conclusion.  “If the United States does not fundamentally change its planning for the future of tactical air power, the advantage held for decades will be soon lost and American air power will become an artifact of history.”

While Russian aircraft rely on speed and long flight times, the U.S. fleet is largely built for stealth so it can evade detection and anti-air weapons to engage targets at closer ranges. But the stealth capability, is now being challenged by advances in Russia’s radar detection platforms and anti-aircraft weapons.

“Today,” Deptula said, “the Russians have an extant significant advantage in their surface to air capabilities.” And that with the exception of the U.S.’s small number of highly advanced 5th generation aircraft, “the Russians can conduct area denial of any airspace within range of their defenses if they want to deny access to aircraft.”

Soviet leader Nikita Khrushchev with U.S. President John F. Kennedy at the U.S. Embassy during their …

Since 2001, the Pentagon has had good reasons for prioritizing spending for troops on the ground in Iraq and Afghanistan over speculative needs for future wars, but a consequence has been that we now have what Deptula calls “a geriatric Air Force and Navy fleet.”

No one, not even Deptula, is suggesting that there’s about to be some all-out showdown between Moscow’s military and Washington. But it’s not at all unlikely, given the new and chilly climate, that American forces and allies could wind up in skirmishes with proxies equipped and trained by Russia. The U.S. used to be able to count on an overwhelming technological advantage. Tomorrow, maybe not.

Foreshadows of this are already being cast. Already, Russia is outfitting the Assad regime in Syria while America runs guns to the rebels there. It’s the Russian side that’s winning.

The change isn’t just about equipment or tactics, though, American forces trained in counter-insurgency who are stationed in Europe could still be deployed to hold the line against Russian advances. But there are drastically fewer forces left in Europe available to be called upon in such an event.

An analysis of Defense cuts published by the conservative American Enterprise Institute in 2013 reported that “the Army alone has closed 100 installations in Europe since 2003 and plans on returning an additional 47 installations to host nations by 2015.” The same report notes, “the Navy has also been consolidating and decreasing its European bases” and “since 1990, the Air Force has reduced aircraft and forces stationed in Europe by 75 percent.” Addressing the future of America’s military footprint in Europe, the paper concludes that the Pentagon is “planning to continue reducing the US presence in Europe by approximately 15 percent over the coming decade.”

The military can’t be equally prepared for every threat and if its focus has been on counter-insurgency, that’s because those are the wars we’ve been fighting for the past twelve years.

Generations of veterans who fought in Iraq and Afghanistan have been raised and bled on COIN doctrine but, as combat demands, they have also learned how to be agile. Individual leaders on the battlefield are able to adapt quickly; it’s the military bureaucracy that’s like a tank: a slow, immensely powerful machine that’s only capable of plotting one course at a time. Quick turns are not an option.

Without many viable military options to counter Russian aggression what’s left for U.S. leaders seeking to punish Russia and assure our NATO allies that we’ll protect them? Cunning diplomacy, maybe.

Crimea is Russian now; that’s not changing any time soon. Condemning the invasion and the fixed terms of the referendum have no more bearing on the current situation than the reasons Russia gave for annexing Crimea—some of them legitimate—ultimately had to do with the duplicity and force they used to take it.

The real question, and the subtext in much of the current talk about Crimea, is whether Russia will stop there or proceed to further conquests.

Despite it’s show of force in Crimea, Moscow has a lot to lose if the conflict broadens and draws in the U.S. and NATO. Russia has gas to sell to Europe, oligarchs counting on feeling comfortable in their London townhouses, a new middle class looking for normalcy that’s already taken to the streets in protest, and the memory of Chechnya, a brutal war that took thousands of lives, fresh in the national memory.

If U.S. officials can present a deal that satisfies American aims while appealing to Russia’s self-interest, they may be able to prevent a larger conflict. But a new age of competition with Russia? That may be even harder to head off.