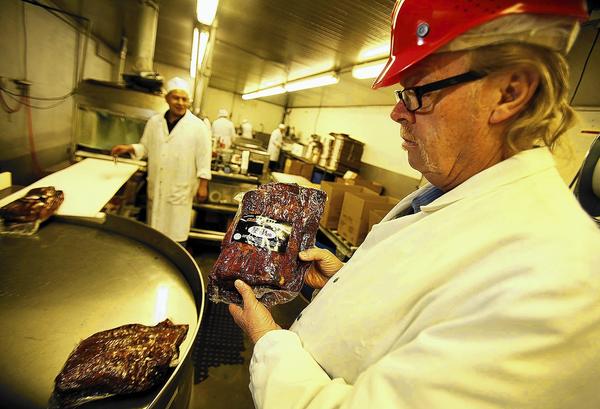 Come grilling season, expect your sirloin steak to come with a hearty side of sticker shock.

Beef prices have reached all-time highs in the U.S. and aren’t expected to come down any time soon.

Extreme weather has thinned the nation’s beef cattle herds to levels last seen in 1951, when there were about half as many mouths to feed in America.

“We’ve seen strong prices before but nothing this extreme,” said Dennis Smith, a commodities broker for Archer Financial Services in Chicago. “This is really new territory.”

The swelling prices are roiling the beef supply chain from rancher to restaurant.

But last week, he reluctantly began printing new menus showing a 50-cent increase for sandwiches at his 67-year-old restaurant.

Langer accepts it’s one of the perils of business when your bread and butter happens to be corned beef and pastrami. But he fears he may have to raise prices again, driving away customers.

“No beef, no delicatessen. That’s the bottom line,” Langer said after a typically frenetic lunch service. “Jewish delis aren’t vegetarian, they’re based on corned beef and pastrami. Things are beyond my control. With the price increase, I hope my customers are tolerant.”

Langer said beef prices are the main reason his wholesale food costs have risen 45% in the last two years — much of it passed from his longtime supplier, R.C. Provision Inc.

The half-century-old Burbank company prepares corned beef, pastrami, roast beef and chili for L.A. icons such as Canter’s Deli, Pink’s Hot Dogs and Original Tommy’s Hamburgers. All the restaurants have to do is heat it up or slice it to their liking.

It’s been an increasingly difficult endeavor, with slaughterhouses driving up their prices for brisket and navel, an extra fatty portion of the belly crucial for making unctuous pastrami.

“For any profitability, you have to mark it up more and more,” said the company’s general manager, Jerry Haines, who has watched profit margins dwindle to about 1% from 5% in the last few years rather than hike prices enough to cover the increased costs.

Speaking last week at his company’s plant scented with paprika and smoked beef, Haines said small businesses like his are struggling to secure enough red meat. Slaughterhouses, also known as packers, are more likely to reserve their reduced supplies for big customers like McDonald’s.

There’s more pressure to throw the special cuts needed to make deli meat into the grinder for hamburgers. What’s left for Haines costs more. Brisket has more than tripled in price since 2008. Navel has more than doubled.

“This whole thing now is being driven by hamburger,” said the gravelly voiced Haines, who keeps years of beef prices recorded on stacks of small sheets of paper. “You take all the McDonald’s and Burger Kings across the United States; the amount of meat needed to make those hamburgers is forcing the value of other cuts of meat to go up.”

The biggest fast-food chains aren’t immune to the price pressure either. Experts say $1 value menus could soon be a thing of the past.

In October, McDonald’s said its Dollar Menu of more than a decade would morph into a so-called Dollar Menu & More, which mixes $1, $2 and $5 items. Wendy’s made a similar move last year.

Yum Brands Inc., which owns Taco Bell, said in December that it expects 4% price inflation for beef and other meats in 2014, though the company didn’t indicate whether the costs would be passed on to consumers.