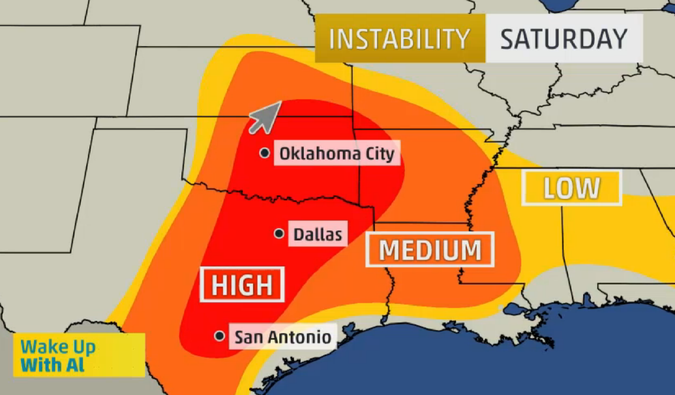 Spring 2014 has been a quiet tornado season thus far, but that’s about to change this weekend, if the predicted forecasts that meteorologists are looking at hold true. Weather experts say conditions are lining up for a series of powerful tornadoes to hit an area ranging between Tennessee and Texas from Saturday through Monday. The National Weather Service predicts a “significant multi-day severe event” in the South plains on Sunday, moving into the Mississippi Valley on Monday.

The extreme warnings stem from an interaction between an East-moving low-pressure system over the Rockies mixing with wetness from the Gulf of Mexico. That will cause the creation of supercell thunderstorms, Slate’s Eric Holthaus explains, all kept in place in the South-Southwest by a high-pressure system in Canada. That makes the area ripe for a “big severe threat” this weekend, according to The Weather Channel, an extra level on top of today’s “severe threat.”

Holthaus notes that the best historical comparisons to a weather pattern like this point to some of the worst tornado outbreaks in U.S. history. That includes the April 26, 1991, stretch of tornadoes from Texas to Iowa that caused a billion dollars in damage and included a rare F5-strength tornado. For those in need of a refresher, here are FEMA’s guidelines for how to prepare for tornadoes.