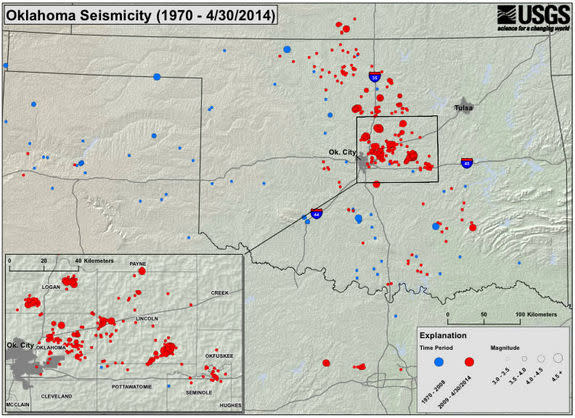 In a joint statement, the agencies said the risk of a damagingearthquake — one larger than magnitude 5.0 — has significantly increased in central Oklahoma.

Geologists don’t know when or where the state’s next big earthquake will strike, nor will they put a number on the increased risk. “We haven’t seen this before in Oklahoma, so we had some concerns about putting a specific number on the chances of it,” Robert Williams, a research geophysicist with the USGS Earthquake Hazards Program in Golden, Colorado, told Live Science. “But we know from other cases around the world that if you have an increasing number of small earthquakes, the chances of a larger one will go up.” [Watch 2500+ Oklahoma Earthquakes Since 2012 (Video)]

That’s why earthquakes of magnitude 5 and larger are more frequent in states such as California and Alaska, where thousands of smaller temblors hit every year.

This is the first time the USGS has issued an earthquake warning for a state east of the Rockies, Williams said. Such seismic hazard assessments are more typically issued for Western states following large quakes, to warn residents of the risk of damaging aftershocks, he said.

The geological agencies took action after the rate of earthquakes in Oklahoma outpaced that of even California for the first few months of 2014. (California regained the lead in April.) 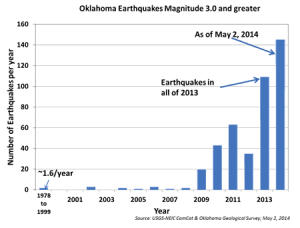 “The rate of earthquakes increased dramatically in March and April,” Williams said. “That alerted us to examine this further and put out this advisory statement.”

While Oklahoma’s buildings can withstand light earthquakes, the damage from a magnitude-5 temblor could be widespread.Oklahoma’s last major earthquake was in November 2011, when a magnitude-5.6 earthquake centered near Prague, Oklahoma, destroyed 14 homes and injured at least two people.

“Building owners and government officials should have a special concern for older, unreinforced brick structures, which are vulnerable to serious damage during sufficient shaking,” Bill Leith, a USGS senior science adviser for earthquakes and geologic hazards, said in the joint statement.

While scientists haven’t ruled out natural causes for the increase, many researchers suspect the deep injection wells used for the disposal of fracking wastewater could be causing the earthquake activity. Fracking, short for hydraulic fracturing, is a method of extracting oil and gas by cracking open underground rock.

Ongoing studies have found a link between Oklahoma’s high-volume wastewater injection wells and regions with an uptick in earthquakes.

If the earthquakes are caused by wastewater injection, then the activity could continue or decrease with future changes in well usage in the state.

“We don’t know if this earthquake rate is going to continue,” Williams said. “It could go to a higher rate or lower, so the increased chances of a damaging quake could change in the future.”