The attack follows last week’s capture by militants of wide swaths of territory in northern Iraq and comes as the specter of the sectarian warfare that nearly tore the country apart in 2006 and 2007 now haunting those trying to decide how to respond.

Meanwhile, the Turkish Foreign Ministry said its diplomats were investigating claims that militants abducted 60 foreign construction workers, including some 15 Turks, near the oil city of Kirkuk in northern Iraq.

Fighters of the al-Qaida-inspired Islamic State of Iraq and the Levant began their attack on the Beiji refinery, some 250 kilometers (155 miles) north of Baghdad, late Tuesday night, the security official said. The attack continued into Wednesday morning, with fighters targeting it with mortar shells. A small fire started on the facility’s periphery, he said.

The official spoke on condition of anonymity because he was not authorized to speak to journalists.

The Beiji refinery accounts for a little more than a quarter of the country’s entire refining capacity — all of which goes toward domestic consumption for things like gasoline, cooking oil and fuel for power stations. 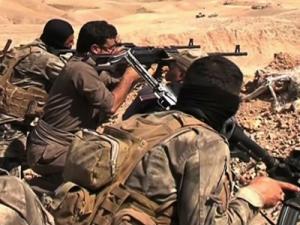 Any lengthy outage at Beiji risks long lines at the gas pump and electricity shortages, adding to the chaos already facing Iraq.

Near Kirkuk, which Kurdish fighters took over from fleeing Iraqi soldiers amid the militants’ advance, the Islamic State kidnapped 60 foreign construction workers building a hospital, Turkey’s private Dogan news agency reported Wednesday. The agency based its report on an unnamed worker who was reportedly freed by the militants.

The Turkish Foreign Ministry could not immediately confirm the report but said its embassy was investigating.

The capture of the city appeared to be a move to strengthen the Islamic State’s plan to carve out an “Islamic emirate” that covers territory on both sides of the territory. 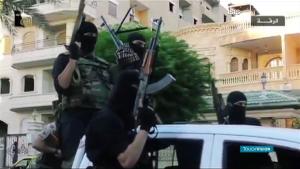 There was no way to independently confirm al-Moussawi’s claim, but state television aired footage late Tuesday of army troops and armed volunteers disembarking from a transport C-130 aircraft at an airstrip near Ta Afar.

The Sunni militants of the Islamic State have vowed to march to Baghdad and the Shiite holy cities of Karbala and Najaf in the worst threat to Iraq’s stability since U.S. troops left. The three cities are home to some of the most revered Shiite shrines. The Islamic State also has tried to capture Samarra north of Baghdad, home to another major Shiite shrine.

Iran, a neighboring Shiite powerhouse, already has seen thousands volunteer to defend the shrines. Iranian President Hassan Rouhani, speaking Wednesday to a crowd gathered at a stadium near his country’s border with Iraq, said that the Islamic State and others would be defeated.

“We declare to all superpowers, their mercenaries, murderers and terrorists that the great Iranian nation will not miss any effort in protecting these sacred sites,” Rouhani said.

Some 275 armed American forces are being positioned in and around Iraq to help secure U.S. assets as President Barack Obama also considers an array of options for combating the Islamic militants, including airstrikes or a contingent of special forces.

The White House has continued to emphasize that any military engagement remains contingent on the government in Baghdad enacting political reforms and ending sectarian tensions, which had been on the rise even before the Islamic State’s incursion last week, with thousands killed since late last year.

Republicans have been critical of Obama’s handling of Iraq, but Congress remains deeply divided over what steps the U.S. can take militarily. Even lawmakers who voted in 2002 to give President George W. Bush the authority to use military force to oust Saddam Hussein have expressed doubts about the effectiveness of drone airstrikes and worry about Americans returning to the fight in a country split by sectarian violence.

“Where will it lead and will that be the beginning or the end?” Sen. Richard Shelby, R-Ala., said, when asked about possible U.S. airstrikes. “We don’t know that. This underlying conflict has been going on 1,500 years between the Shias and the Sunnis and their allies. And I think whatever we do, it’s not going to go away.”

During the United States’ eight-year presence in Iraq, American forces acted as a buffer between the two Islamic sects, albeit with limited success. But U.S. forces fully withdrew at the end of 2011 when Washington and Baghdad could not reach an agreement to extend the American military presence there.

The price of oil neared $107 on Wednesday after easing slightly Tuesday following the U.S. saying it would deploy the small group of troops.