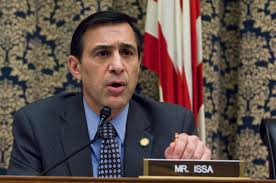 Republicans dropped a hammer on IRS Commissioner John Koskinen during a testy hearing covering the disappearance of emails tied to the agency’s tea party targeting scandal.

The emails, covering the period January 2009 to April 2011, belonged to embattled former official Lois Lerner and could shed light on whether an expansive scheme to single out conservative groups for special scrutiny was guided by members of Congress or administration officials outside the IRS.

‘The committee requested all of Lois Lerner’s emails over a year ago,’ said House Oversight Committee Chairman Rep. Darrell Issa. ‘And we subpoenaed the emails in August 2013 and again in February 2014. … You worked to cover up the fact they were missing and only came forward to fess up on a Friday afternoon after you had been caught red-handed.’

SCROLL DOWN FOR VIDEO

No apologies: In a separate congressional hearing on Friday, IRS Commissioner John Koskinen insisted the loss of Lerner’s emails was due to an oddly timed glitch

Spectator sport: The IRS hearing drew a line down the hallway and brought more than 225,000 viewers to an online video livestream

Monday’s unusual evening hearing came as the result of a subpoena, and will continue Tuesday morning with a command performance from another Obama administration official.

Before O’Connor’s promotion to the White House Counsel’s office, she was counsel to then-Acting IRS Commissioner Danny Werfel.

Just ten days ago the IRS informed congressional investigators that a hard drive crash had destroyed 28 months of emails to and from Lerner, who led the IRS’s office in charge of vetting and policing tax-exempt nonprofit groups.

In an opening statement Monday night, Koskinen argued that ‘it is not unusual for computers anywhere to fail, especially at the IRS in light of the aged equipment IRS employees often have to use in light of the continual cuts in its budget these past four years.’

‘Since Jan. 1 of this year, for example,’ he claimed, ‘over 2,000 employees have suffered hard drive crashes.’

Koskinen referred several times on Monday to a lack of budget resources within the IRS, and raised the issue when asked why the agency didn’t do a better job keeping a backup of Lerner’s emails.

An outraged Issa insisted that Americans should be able to know ‘they’re being honestly treated by your employees, especially somebody at such a high level. Isn’t that in fact a priority that should have allowed for full retention?’

‘If we had the right resources, there would be a lot of priorities,’ Koskinen shot back.

‘That’s pretty much what you’re telling us here tonight, is that resources are a question of whether or not you retain key documents.’

When Tennessee Republican Rep Scott DesJarlais asked Koskinen how much money it would take to replace the IRS’s computer systems in order to prevent another major data loss, he answered that it would cost between $10 and $30 million.

In a tense moment, DesJarlais then reminded him that the IRS paid $89 million in bonuses last year, including $1 million to agency employees who owed back taxes.

Issa added that the agency has an $1.8 billion information technology budget.

Koskinen also said that ‘the Treasury Inspector General for Tax Administration has already begun an investigation’ into the email losses.

‘His report will provide an independent review of the situation concerning Ms. Lerner’s computer crash three years ago.’

That’s the same inspector general unit that launched Lerner into the spotlight 13 months ago, with an audit of its ‘inappropriate’ use of keywords like ‘patriots’ and ‘tea party’ to identify tax-exemption applicants that would receive inordinate levels of screening.