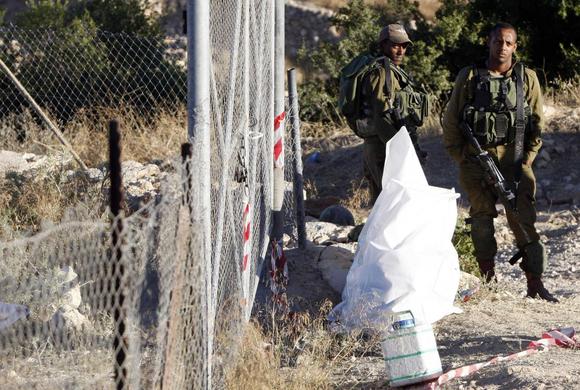 (Reuters) – Israel bombed dozens of sites in the Gaza Strip on Tuesday, striking at Hamas after finding the bodies of three missing teenagers whose abduction and killing it blames on the Palestinian Islamist group.

Israel’s security cabinet, which held an emergency session late on Monday and was due to meet again on Tuesday, was split on the scope of any further action in the coastal enclave or in the occupied West Bank, officials said. The United States and regional power-broker Egypt urged restraint.

Prime Minister Benjamin Netanyahu had promised Hamas would pay after the discovery of the three Jewish seminary students’ bodies under rocks near the West Bank city of Hebron on Monday.

The military said aircraft attacked 34 sites, mostly belonging to Hamas, though its statement did not link the strikes to the abductions. Palestinian medics said two people were slightly wounded.

The military cited 18 Palestinian rockets launched against Israel from Gaza in the past two days.

The Islamist group has neither confirmed nor denied involvement in the disappearance of the students as they hitchhiked near a Jewish settlement on June 12 nor in the cross-border rocket salvoes from Gaza.

The funerals of Gil-Ad Shaer and U.S.-Israeli national Naftali Fraenkel, both 16, and Eyal Yifrah, 19 were due to take place later on Tuesday in the Israeli city of Modi’in, where they were to be buried side-by-side. At the security cabinet meeting, the army proposed “considered and moderate actions” against militants in the West Bank, officials said. Any sustained campaign there could undermine U.S.-backed Palestinian President Mahmoud Abbas.

But the cabinet did not agree on a future course of action at that session, officials added. In Gaza, Hamas spokesman Sami Abu Zuhri warned Israel against going too far.

“The response of the resistance has been limited, and Netanyahu must not test Hamas’s patience,” said Abu Zuhri, whose group’s arsenal includes rockets that can reach Tel Aviv.

Netanyahu seized on the abduction to demand Abbas annul a reconciliation deal he reached with Hamas, his long-time rival, in April that led to a unity Palestinian government on June 2.

An Arab diplomat familiar with Egyptian mediation between Israel and the Palestinians said that Cairo, echoing Washington, expected the Netanyahu government to tread carefully. “I don’t believe Israel is ready, just yet, to change the status quo,” he told Reuters on condition of anonymity. “It can punish those who did the crime, but should not get out of control with civilians who had nothing to do with the crime.” In the West Bank on Tuesday, an Israeli military spokeswoman said troops opened fire at a man, identified by Palestinian officials as Yousouf Al-Zagha, 19, who threw a grenade at soldiers attempting to arrest a militant in Jenin refugee camp. A Palestinian witness said Zagha was an innocent passerby.

The men Israel has accused of carrying out the abductions are still at large. Israeli media said the break in the case came after their relatives were interrogated.

Troops set off explosions in the family homes of the alleged abductors late on Monday, blowing open a doorway in one, an army spokeswoman said. The other property was on fire after the blast. Soldiers, who arrested one of the suspect’s father and brothers, ordered the inhabitants of the dwellings to leave before the detonations.

“This kind of act is a sin, whether you’re a Muslim or Jew. They’ve scared the kids so much,” Um Sharif, the mother of one of the alleged kidnappers, said about the damage to her home.

Hamas has been rocked by the arrest of dozens of its activists in an Israeli sweep in the West Bank over the past three weeks during the search for the teenagers that Israel said was also aimed at weakening the militant movement. Up to six Palestinians died as a result of the Israeli operation, local residents said

After news of the teenagers’ deaths, condolence messages and condemnation of the killings poured in from foreign leaders.

“The United States condemns in the strongest possible terms, this senseless act of terror against innocent youths,” President Barack Obama said in a statement. “I also urge all parties to refrain from steps that could further destabilise the situation.”

Abbas condemned the abduction and pledged the cooperation of his security forces, drawing criticism from Hamas and undercutting his popularity among Palestinians angered by what they saw as his collusion with Israel.

Hamas, which has maintained security control of the Gaza Strip since the unity deal, is shunned by the West over its refusal to renounce violence. The group has called for Israel’s destruction, although various officials have at times indicated a willingness to negotiate a long-term ceasefire.