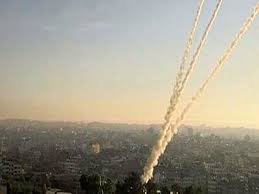 Air raid sirens rang out in Greater Tel Aviv, and in Jerusalem, Kfar Saba and the Binyamina area on Tuesday evening, marking an increase in the Gazan rockets’ range, on the first day of Operation Protective Edge.

An Iron Dome battery intercepted the incoming rocket over Tel Aviv. Hamas announced it had fired four M-75 rockets at the capital. Two loud thuds were heard in downtown Jerusalem shortly after the rocket warning siren went off at 9:56 p.m. Thousands of residents entered bomb shelters, while others remained outside and in cafés.

Police spokesman Micky Rosenfeld said none of the rockets fired from Gaza hit in side the capital, although two rockets struck just outside the city. At least one rocket hit in the adjacent Mateh Yehuda region. A rocket hit near a home, but there was no damage.

The Jerusalem Municipality announced Tuesday evening that it will open public bomb shelters across the capital. The municipality also recommended that residents open their private shelters.