After initially rejecting an Israeli offer Saturday for a 24-hour truce, Hamas said Sunday it agreed to hold fire ahead of the Eid al-Fitr holiday marking the end of the Muslim fasting month of Ramadan. But as Israel’s Cabinet met to discuss the offer and the ongoing war, rockets rained down on southern Israel and Israeli strikes could be heard in Gaza.

Each side blamed the other for scuttling the efforts.

Hamas said that “due to the lack of commitment” by Israel, it resumed its fire. Israeli Prime Minister Benjamin Netanyahu said that Hamas showed it could not be trusted after it violated other cease-fire efforts.

“Israel is not obliged and is not going to let a terrorist organization decide when it’s convenient to fire at our cities, at our people, and when it’s not,” Netanyahu told “Fox News Sunday.”

International diplomats had hoped a temporary lull could be expanded into a more sustainable truce to end the bloodshed and U.N. chief Ban Ki-moon urged the sides on Sunday to accept a 24-hour break in fighting. 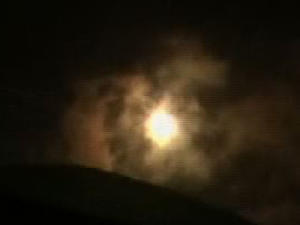 The 20-day war has killed more than 1,030 Palestinians, mainly civilians, according to Palestinian health officials. Israel has lost 43 soldiers, while two Israeli civilians and a Thai worker in Israel were killed by rocket and mortar attacks from Gaza.

Israel says it launched the war on Hamas July 8 to halt relentless rocket fire. It expanded its assault over a week later, sending ground troops into the Gaza Strip to demolish Hamas’ wide network of tunnels, which Israel sees as a strategic threat.

Each side remains far apart on terms for a final cease-fire. Hamas has demanded that a crippling Israeli and Egyptian blockade of Gaza be lifted and Israel has asked that Gaza be demilitarized.

Following Hamas’ call for a break in fighting, an Israeli airstrike killed one person in Gaza when it hit a vehicle carrying municipal workers on their way to fix water pipes, the Palestinian Red Crescent said.

Families in Gaza ordinarily would be busy now with preparations for the three-day Eid al-Fitr holiday, with children getting new clothes, shoes and haircuts, and families visiting each other.

In the outdoor market of the Jebaliya refugee camp, vendors set up stands with clothes and shoes, but said business was slow. Hamed Abul Atta, 22, a shoe salesman, said he hadn’t made a single sale in the first three hours after opening.

Abul Atta said he and his family were staying with relatives after fleeing the Shijaiyah district of Gaza City, which has seen heavy fighting. He said a cousin and three other relatives were among dozens of people killed there last week.

“We can’t feel any joy right now,” he said when asked if he would mark the holiday.

Also after Hamas’ call for a cease-fire, a rocket fired from Gaza lightly wounded one person in Israel, police said. Sirens wailed in a number of southern Israeli towns.

The Israeli military said earlier it would “resume its aerial, naval and ground activity in the Gaza Strip” after rockets continued to hit Israel. It said more than 50 rockets had been fired since midnight. The military also released a video showing a rocket being fired from what it identified as a Gaza school.

The Israeli military says it is doing its utmost to prevent civilian casualties, including by sending evacuation warnings to residents in targeted areas, and blames Hamas for putting civilians in harm’s way.

More than 160,000 displaced Palestinians have sought shelter at dozens of U.N. schools, an eight-fold increase since the start of Israel’s ground operation more than a week ago, the U.N. said.

An Israeli tank fires towards Gaza, near the Israel and Gaza border in the morning of Sunday, July 2 …

Hamas and other militants in Gaza have fired more than 2,400 rockets at Israel since hostilities began on July 8, many deep into the Israeli heartland and toward most of the country’s major cities.

Israeli airstrikes have destroyed hundreds of homes, including close to 500 in direct hits, according to Palestinian rights groups. Entire Gaza neighborhoods near the border have been reduced to rubble.

Before the announcement of the holiday cease-fire, Hamas spokesman Sami Abu Zuhri had said any truce must include a withdrawal of Israeli forces from Gaza, and that tens of thousands of displaced people must be allowed to return to their homes.

Israel’s acceptance of the cease-fire extension was premised on its soldiers remaining in Gaza to destroy the more than 30 tunnels the military says it has found. Hamas has said it will not halt fire until it wins guarantees that the border blockade, tightened by Israel and Egypt after it seized the territory in 2007, will be lifted.

Any new border arrangements for Gaza would likely give a role to Western-backed Palestinian President Mahmoud Abbas, who reached a power-sharing deal earlier this year with Hamas that was harshly condemned by Israel. Egypt wants forces loyal to Abbas to be posted on the Gaza side of the border before considering opening its Rafah crossing.

Israeli police meanwhile said security forces prevented a major attack when they stopped a suspicious vehicle in the West Bank and discovered a large explosive inside. Police said the suspect was a Palestinian from the West Bank city of Ramallah in his 30s.