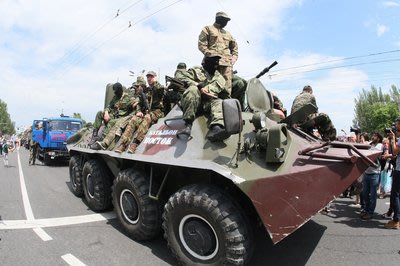 On Friday, as a Russian “aid convoy” of 280 trucks neared the Ukrainian border, NATO said that a separate “incursion” of Russian military forces had crossed into Ukraine. The Russian forces are reportedly in eastern Ukrainian territory held by Russia-backed separatist rebels, according to NATO and Ukrainian government officials. Some reports suggest that there may be open fighting between Ukrainian military forces and the Russian incursion, but it’s far from clear whether that’s true or what precisely is happening on the ground.

Did Russia really invade Ukraine outright? Is this now an open war? Here is a running account of what we know and what we don’t know.

— Russia is sending a “humanitarian convoy” to Ukraine, but it seems pretty military. 280 Russian trucks, flanked by attack helicopters, have been moving toward the Ukrainian border. Russia says they’re carrying humanitarian assistance for the people of east Ukraine. Ukraine fears it’s a stealth invasion force. Russia opened up the trucks to journalists, and the BBC reported that they were mostly empty. The convoy earlier stopped at a Russian military base.

— NATO says Russian troops just crossed into Ukraine. “Last night we saw a Russian incursion, a crossing of the Ukrainian border,” NATO Secretary General Anders Fogh Rasmussen said on Friday. However, this has been going on for some time. Bloomberg reports that these troops weren’t part of the aid convoy.

— Russia is denying that any troops crossed. The Russian defense ministry denies both that any Russian vehicles crossed the border into Ukraine and that any were destroyed there. The official statement referred to the Ukrainian claims as “some kind of fantasy.”

— Russia has been backing separatist rebels in eastern Ukraine for months. The pro-Russia rebels, who are in many cases Russian themselves, declared independence in cities like Donetsk and have been fighting Ukrainian government forces.

— Russia used a stealth invasion force to seize Crimea in March, by quietly sending unmarked special forces into the Ukrainian region. The Russian troops quickly seized the region, expelled Ukrainian forces, held a fraud-ridden referendum on seceding, and annexed Crimea. There are fears Moscow may attempt the same here.

— The UK is taking these allegations seriously. The UK Foreign Office’s Chief Operating Officer, Matthew Rycroft, “summoned” (in his words) the Russian ambassador to the UK and “demanded [an] explanation of reports of Russian military in Ukraine without Ukrainian agreement.”

— The Ukrainian and Russian foreign ministers are meeting on Sunday, in Berlin with top diplomats from Germany and France. The meeting, set late on Friday, looks like it is probably a European-brokered attempt to deescalate the situation.

What we don’t know

— Whether Russian tanks have crossed into Ukraine. If so, that would be a major escalation from the past practice of sending small numbers of unmarked troops, and a big step toward an overt war.

— Whether Ukraine actually fired on Russian vehicles. There is no independent confirmation of whether the incident Ukraine describes with Russian troops take place. If Ukraine did fire on and destroy Russian vehicles, as it claims, it’s not clear whether those vehicles were driven by formal Russian soldiers or pro-Russian separatists.

— Whether the Russian aid convoy is part of a secret invasion force. That’s what Ukrainian officials say, and the fact that the trucks appear to be empty is highly suspect, but it’s still not clear whether or not the 280-truck convoy is part of some secret plot or just there deliver humanitarian supplies, as Moscow says.

— Whether Ukraine fired on parts of the convoy. Assuming Ukraine actually destroyed Russian vehicles, we still don’t know what kind, where they were from, or what they were there for. NBC News reports that, from Ukrainian descriptions, “It is unclear whether the fighting is focused on an armored vehicle convoy or the aid shipments.”

— What Russia does next. Again assuming the incident Ukraine described happened, it’s totally unclear how Russia would respond. Will they escalate to full warfare with Ukraine? That remains to be seen.

— Could Russia try to annex eastern Ukraine? That’s what they did in Crimea, and Russia has been backing separatist rebels in eastern Ukraine for months. But that would be a big step, and even riskier than the Crimea annexation.

— How will the US and Europe respond if Russia really invades? American and European leaders have ratcheted up economic sanctions on Russia to deter it from invading, but have been hesitant to directly arm or supply Ukraine, for fear of getting sucked into a war. It’s not clear how they’ll respond if open war breaks out between Russia and Ukraine.