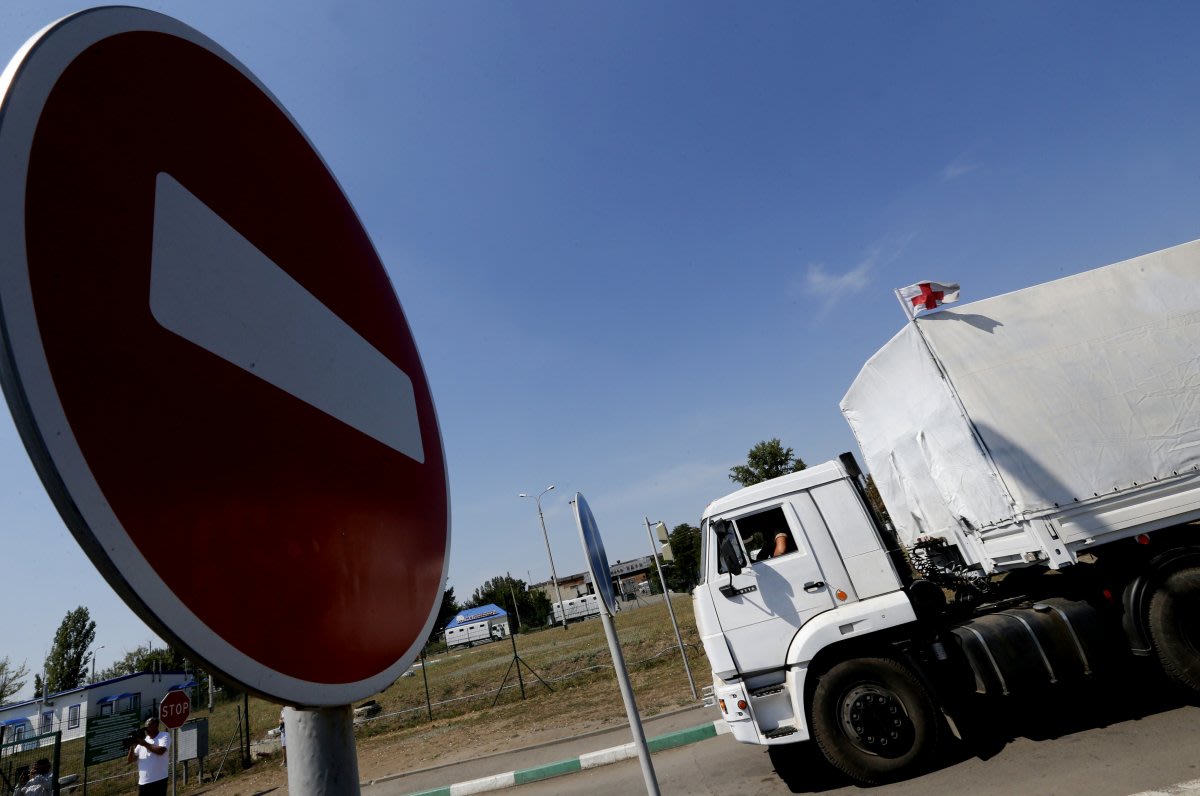 A truck of a Russian convoy carrying humanitarian aid for Ukraine drives onto the territory of Russia-Ukraine border crossing point “Donetsk” in Russia’s Rostov Region on Friday. Russia ordered a convoy of aid trucks across the border into eastern Ukraine on Friday apparently without Kiev’s permission, raising the danger of direct confrontation with the Ukrainian military, which is fighting pro-Russian rebels.

NATO on Friday condemned the entry of a Russian “humanitarian” convoy into Ukrainian territory without the consent of Ukrainian authorities, an event Ukraine charged was a “direct invasion.”

And for the first time, NATO accused Russia of directly intervening in Ukraine, as Secretary General Anders Fogh Rasmussen said Russian artillery support was being employed against Ukrainian forces in eastern regions in which fighting has raged for months.

Rear Adm. John Kirby, a spokesman for the Pentagon, said it was an “unauthorized entry” and told Russia to “remove its vehicles immediately.”

Rasmussen said the Russian convoy had entered into Ukraine without its government’s consent and without any involvement from the Red Cross. He warned it would only escalate the crisis in the region to worrying levels, and he suggested it threw into question whether Russia’s true purpose for providing the “humanitarian” aid was to supply arms to pro-Russian separatists.

“This is a blatant breach of Russia’s international commitments, including those made recently in Berlin and Geneva, and a further violation of Ukraine’s sovereignty by Russia,” Rasmussen said. “It can only deepen the crisis in the region, which Russia itself has created and has continued to fuel. The disregard of international humanitarian principles raises further questions about whether the true purpose of the aid convoy is to support civilians or to resupply armed separatists.”

In a statement earlier on Friday , Ukrainian President Petro Poroshenko said “a column of more than 100 vehicles entered Ukrainian territory without a customs inspection, without border control or International Red Cross escort, which is a flagrant violation of international law.”

Rasmussen also said NATO has observed a “major escalation” in Russian military involvement in the region over the past handful of days, including direct artillery support both from across the border and within Ukraine.

“These developments are even more worrying as they coincide with a major escalation in Russian military involvement in Eastern Ukraine since mid-August, including the use of Russian forces. In addition, Russian artillery support — both cross-border and from within Ukraine — is being employed against the Ukrainian armed forces,” Rasmussen said.

“We have also seen transfers of large quantities of advanced weapons, including tanks, armored personnel carriers, and artillery to separatist groups in Eastern Ukraine. Moreover, NATO is observing an alarming buildup of Russian ground and air forces in the vicinity of Ukraine.”

Separately, a U.S. official  told CNN’s Barbara Starr  that Russia now has up to 18,000 “combat-ready” troops near the Ukrainian border.