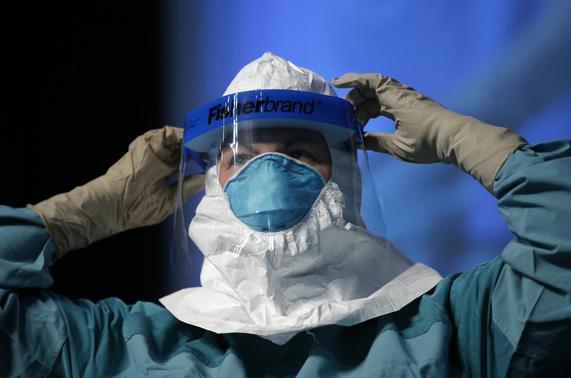 (Reuters) – The Ebola crisis is forcing the American healthcare system to consider the previously unthinkable: withholding some medical interventions because they are too dangerous to doctors and nurses and unlikely to help a patient.

U.S. hospitals have over the years come under criticism for undertaking measures that prolong dying rather than improve patients’ quality of life.

But the care of the first Ebola patient diagnosed in the United States, who received dialysis and intubation and infected two nurses caring for him, is spurring hospitals and medical associations to develop the first guidelines for what can reasonably be done and what should be withheld.

Officials from at least three hospital systems interviewed by Reuters said they were considering whether to withhold individual procedures or leave it up to individual doctors to determine whether an intervention would be performed.

Ethics experts say they are also fielding more calls from doctors asking what their professional obligations are to patients if healthcare workers could be at risk.

U.S. health officials meanwhile are trying to establish a network of about 20 hospitals nationwide that would be fully equipped to handle all aspects of Ebola care.

Their concern is that poorly trained or poorly equipped hospitals that perform invasive procedures will expose staff to bodily fluids of a patient when they are most infectious. The U.S. Centers for Disease Control and Prevention is working with kidney specialists on clinical guidelines for delivering dialysis to Ebola patients. The recommendations could come as early as this week.

The possibility of withholding care represents a departure from the “do everything” philosophy in most American hospitals and a return to a view that held sway a century ago, when doctors were at greater risk of becoming infected by treating dying patients.

“This is another example of how this 21st century viral threat has pulled us back into the 19th century,” said medical historian Dr. Howard Markel of the University of Michigan.

Some ethicists and physicians take issue with the shift.

Because the world has almost no experience treating Ebola patients in state-of-the-art facilities rather than the rudimentary ones in Africa, there are no reliable data on when someone truly is beyond help, whether dialysis can make the difference between life and death, or even whether cardiopulmonary resuscitation (CPR) can be done safely with proper protective equipment and protocols.

Such procedures “may have diminishing effectiveness as the severity of the disease increases, but we simply have no data on that,” said Dr. G. Kevin Donovan, director of the bioethics center at Georgetown University.

Donovan said he had received inquiries from fellow physicians about whether hospitals should draw up lists of procedures that would not be performed on an Ebola patient. “To have a blanket refusal to offer these procedures is not ethically acceptable,” he said he told the doctors.

Nevertheless, discussions about adopting policies to withhold care in Ebola cases are under way at places like Geisinger Health System, which operates hospitals in Pennsylvania, and Intermountain Healthcare, which runs facilities in Utah, according to their spokesmen.

Dr Nancy Kass, a bioethicist at Johns Hopkins Bloomberg School of Public Health, said healthcare workers should not hesitate to perform a medically necessary procedure so long as they have robust personal protective gear.

Although it is not yet clear how the Dallas nurses became infected, health officials have questioned both the lack of adequate training in the use of protective gear and the decision to perform invasive procedures.

The American Society of Nephrology and CDC are now working on new dialysis guidelines for Ebola patients, whose kidneys often fail. In some cases, dialysis can help a patient get through the worst of the illness until their own immune system can fend off the virus.

Nephrologist Dr. Harold Franch said the new guidelines will consider both whether the procedure is medically necessary and whether the hospital can do it safely.

“Most academic medical centers and many good private tertiary care hospitals will be able to do this,” he said. Yet he thinks many hospitals may not offer the service, since “it takes a lot of money and time to train people.”

Throughout the history of medicine some doctors have declined to treat infectious patients or fled epidemics, said Michigan’s Markel. Greek physician and philosopher Galen fled Rome during the bubonic plague 1,800 years ago, doctors deserted European cities stricken by the Black Death of the Middle Ages, and some health workers refused to treat HIV/AIDS patients in the 1980s.

“The idea that a doctor would stick to his post to the last during an epidemic, that’s not part of the Hippocratic Oath,” Markel said. “If you feel your life is at risk you don’t have to stay and provide care.”

At University of Chicago Medicine, questions of taking last-ditch measures were discussed early in the hospital’s Ebola planning, said Dr. Emily Landon, a bioethicist and epidemiologist.

Decisions about offering services such as dialysis or inserting a breathing tube are made in advance by the hospital’s care team in consultation with patients. But if a doctor on the team feels in the moment that she cannot provide the service, another may step in and do the procedure.

Landon views dialysis as a “no brainer” for Ebola patients, and believes the risks are fairly low to the well-trained nursing staff who have volunteered for the hospital’s isolation ward.

But putting in a breathing tube and putting them on a ventilator is more controversial.

“We have very little experience with that except for Mr Duncan, who didn’t do well,” she said. The hospital plans to consult with patients before the need arises and plans to insert a breathing tube at the earliest sign that it might be needed.

CPR, which is performed when a patient’s breathing or heart stops, also poses risks. It can involve chest compressions, inserting breathing tubes and other invasive procedures.

If a patient goes into cardiac or respiratory arrest, a team would have to don protective gear. Rushing could leave them without proper protection, but a delay could make the procedure ineffective.

That represents too great a risk for caregivers for what could be “a futile act,” said Dr. Joseph Fins, chief of medical ethics at Weill Cornell Medical College in New York City.