St. Louis-area resident Carolyn Colburn opened her front door two nights ago and had a bulletin from the City of Berkeley fall at her feet.

“The grand jury decision regarding the Ferguson police officer shooting of Michael Brown is expected this month — rumored as the middle of November, possibly this week,” warned the “News Alert” from town officials.

“It is important that we all plan ahead in the event that conditions warrant each of us to stay at or very close to our homes for several days,” stated the flier, which Berkeley distributed to 3,000 homes this week. 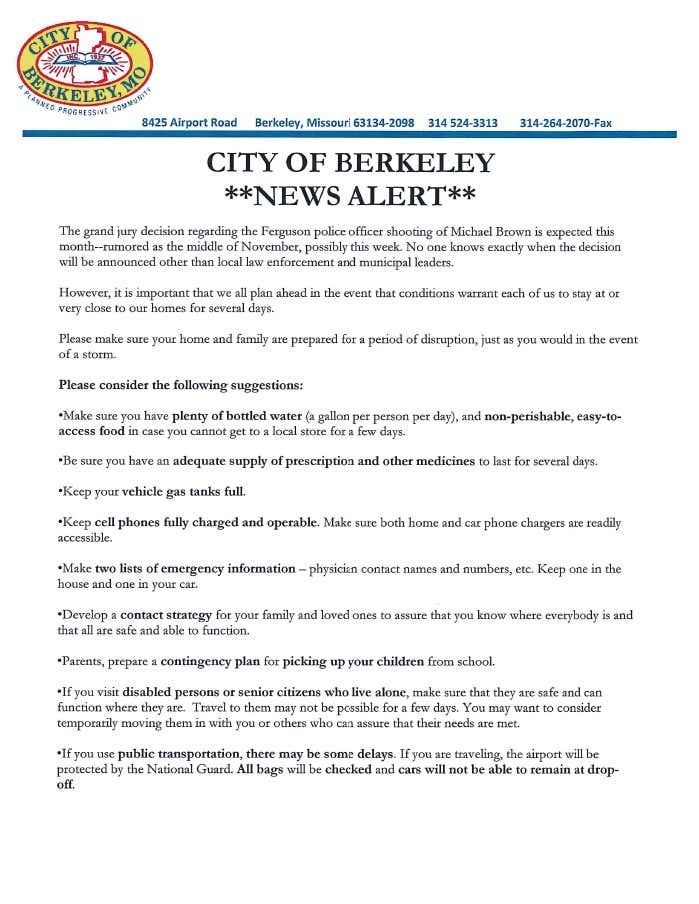 Berkeley, a bedroom community with 9,000 residents, borders Ferguson, where the fatal shooting of an unarmed black teenager on Aug. 9 triggered protests and riots and sparked a nationwide debate on race, policing and justice.

With few businesses in Berkeley, residents like Colburn do their shopping in neighboring Ferguson.

“It is very sad that we have to live in this fear,” Colburn told Yahoo News by email.

No date has been set for the grand jury’s ruling, but St. Louis County Prosecuting Attorney Robert McCulloch has said he expects an announcement in mid- to late November.

For the past month, law enforcement leaks to reporters have suggested that a grand jury will not indict Ferguson Officer Darren Wilson for killing Brown.

If that turns out to be the case, Berkeley Mayor Theodore Hoskins told Yahoo News, “it’s possible” the second round of protests will be worse than the first.

“There has been a three-month anger setting up,” said Hoskins, 76. “We get the feeling that there might be something destructive occur. I don’t want my residents waking up one morning not knowing what to do.”

So earlier this week, the city of Berkeley began putting tip sheets with safety advice on the doors of every home.

Please make sure your home and family are prepared for a period of disruption, just as you would in the event of a storm,” the city advises.

In addition to suggesting that residents stock up on food, water, gas, medications and other supplies, the advisory says to have contingency plans for picking up children from school and taking care of the elderly.

“Travel to them may not be possible for a few days,” the alert states. “You may want to consider temporarily moving them in with you or others who can assure that their needs are met.”

Hoskins said feedback on the town’s decision has been mostly positive.

“You’ll always have two or three saying you’re creating an alarm that may be unnecessary, and we understand that,” he said.

Berkeley City Hall is four miles from the street where the deadly altercation between the officer and teen took place.

“I never thought that the incident that occurred in August would ever happen in our community,” Hoskins, a Berkeley resident for nearly 50 years, said of the shooting and aftermath. “I was under the impression that everybody had proper training for those types of situations.”

The bulletin suggests that residents load up on nonperishable supplies, especially since it’s unknown whether Ferguson’s stores will remain open.

“That’s the closest community that we go to, so we are just taking it safe,” Hoskins said.

Colburn was in Ferguson on Wednesday evening and said many businesses have already begun boarding up windows.

“Aggression and unrest are definitely rising,” she said. “I am worried about my son not being able to come home for Thanksgiving break.”

McCulloch, the prosecutor, has said claims of an announcement date or time should be ignored. But Hoskins said he is too close to the situation, with too much at stake, to remain idle.

“It seems to be narrowed down to between now and Monday,” the mayor said. “If anything spills over into our community, then I’ll declare an emergency and we will do certain other things to protect our residents.”