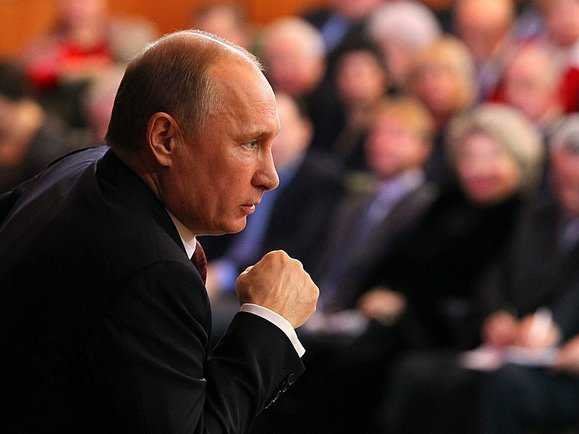 Russian President Vladimir Putin expressed his belief that Russia is the strongest nation, which will lead to — in his eyes — a positive end in Crimea, according to an  interview with the state-owned TASS news agency.

During the interview, Putin stated that everything will “end well” in Crimea because “it’s just that we’re stronger [than] everybody.”

“We’re stronger,” he said, “because we’re right. When the Russian feels that he’s right, he’s unstoppable. I’m saying this sincerely, not just to pontificate,” he added.

Right now, there is an on-going conflict in the southern and eastern parts of Ukraine — areas which have predominantly ethnic Russian populations since the days of the Soviet Union.

Back in March 2014, Russia   annexed Crimea , which was previously a part of Ukraine. Since then, there has been conflict between the pro-Russian separatists and the Ukrainian government — most notably in the Luhansk and Donetsk regions.

Certain inhabitants of the region want to join Russia, while others want to remain in Ukraine.

But the Russian government has its own plan for Ukraine: “federalization.”

“Each region [in Ukraine] would have control of its economy, taxes, culture, language, education, and ‘external economic and cultural connections with neighboring countries or regions,'” Russia’s foreign minister Sergei Lavrov has previously stated about the “federalization” plan, according  to  The Guardian .

This would give greater autonomy to the southern and eastern parts of Ukraine — where the conflict is currently going on. In simple terms, these regions would be directly associated with Russia, rather than with Ukraine.

Noted American political scientist Ian Bremmer  recently stated  that “the Kremlin is moving towards making Crimea and the Southeast Ukraine a single place” and “there’s very little the Ukrainians can do” because their “military will remain badly outgunned, and the local populations in the region remain fairly anti-Kiev.”

Although some people have expressed their beliefs that Putin is just winging it right now in Ukraine, Putin stated in the TASS interview that the current situation — including the actions in Crimea and afterwards — “is a strategic decision.”

“I have developed a certain style over the years. I never make arbitrary decisions — the ones whose outcomes I cannot see,” Putin said. “It’s like when you’re [driving] on the road: if you’re not sure, don’t pass [the car next to you]… You have to be absolutely clear that there’s no upcoming traffic — that you’re truly in control of the situation.”