Following yesterday’s shocking murder of 12 people at the Charlie Hebdo headquarters, there has been much confusion and many rapidly moving parts in the hours that followed as authorities try to catch the two remaining killers, the 32 and 34-year old Kouachi brothers, after earlier the youngest of three French suspects turned himself in to police after, as BFM TV reported, he saw his in social media. The arrest was confirmed by an official at the Paris prosecutor’s office said. Several people linked to two other suspected attackers were also in custody, the news agency AFP reported. The manhunt for the two remaining suspects goes on.

Indicative of the confusion and false information is the following report from NBC Nightly News which turned out to be fake: 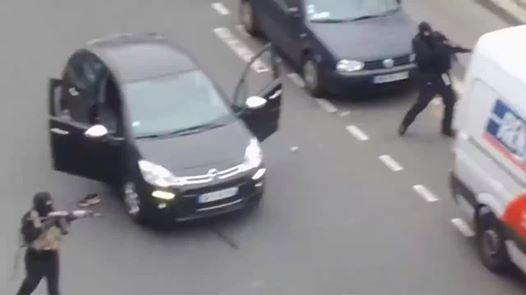 BREAKING: MORE: 1 suspect in Paris attack has been killed and the remaining 2 are in custody http://nbcnews.to/1xGJCpN

How did the rumor spread to the very top of the food chain? From NBC: “Earlier Wednesday, two senior U.S. counterterrorism officials told NBC News that one of the suspects in the attack had been killed and that two others were in custody. However, the officials later said the information that was the basis of that account could not be confirmed.”

What we do know about the two remaining suspects as the countrywide manhunt deepens is that they were said to have robbed a service station in the north of France. According to BBC, they stole food and petrol, firing shots as they struck at the roadside stop near Villers-Cotterets in the Aisne region, French media report.

According to the manager of the service station that was robbed on the RN2 road in Aisne at about 10:30 (09:30 GMT), the attackers fit the description of the two men, and were heavily armed with Kalashnikovs and rocket-propelled grenade launchers.

Earlier in the day, a policewoman was killed in a shootout in southern Paris on Thursday, triggering searches in the area as the manhunt widened, Reuters reports.

Police sources could not immediately confirm a link with the killings at Charlie Hebdo. Montrouge mayor Pierre Brossollette said the policewoman and a colleague went to the site to deal with a traffic accident. A car stopped and a man got out and shot at them before fleeing.

Witnesses said the shooter fled in a Renault Clio car. Police sources said he had been wearing a bullet-proof vest and had a handgun and assault rifle. However, one police officer at the scene told Reuters the man did not appear to fit the bill of the Charlie Hebdo shooters.

Live French television showed around a dozen police dressed in protective wear and helmets massed outside a building near the scene of the shoot-out. A second person was seriously injured in the attack in the suburb of Montrouge, after which the gunman fled.

Finally, a backlash in France may be forming when as Reuters also reported, an explosion rocked a kebab shop next to a mosque in Villefrance-sur-Saone in eastern France early on Thursday morning, a police source told Reuters.

“The window was blow out by an explosion in the night. The kebab shop was adjacent to a mosque,” the source said, adding it appeared to be a criminal act. French media reports said there were no wounded.

While we follow the latest updates and ongoing developments in the most deadly militant attack on French soil in decades, we remind readers of what we observed was the common theme in the most popular Zero Hedge articles of 2014: “civil unrest.” In that regard one can note that 2015 is so far nothing but a very bad, and unfortunately deadly, continuation of last year.

One thought on “France Update: Explosion Near Mosque, Policeman Shot In Paris, Countrywide Manhunt For Suspects”