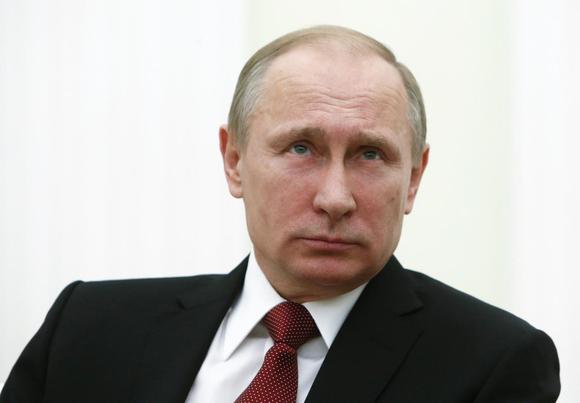 (Reuters) – Russian President Vladimir Putin reappeared on Monday after 10 unexplained days out of public view, laughing off the “gossip” over his health that had erupted during his absence.

The 62-year-old leader met the president of Kyrgystan at a lavish Tsarist-era palace outside St Petersburg in his first appearance since Feb. 5. His unexplained absence had fueled rumors he was ill, had been overthrown by the army or had even flown abroad to attend the birth of a love child.

“It would be boring without gossip,” Putin said, smiling easily before television cameras and looking relaxed, if pale, in a dark suit and tie.

His spokesman, Dmitry Peskov, mocked the press for its interest, referring sarcastically to the various rumors: “So you’ve seen the broken, paralyzed president, who has been captured by generals? He’s only just flown in from Switzerland, where he attended a birth as you know.”

In a carefully choreographed double-act, Kyrgyz President Almazbek Atambayev also vouched for the Russian leader’s health, saying that Putin “just now drove me around the grounds; he himself sat at the wheel.”

The Russian leader prides himself on his macho image. In 2008 he said he worked like a “galley slave” to run Russia. Typically, he is shown most days on state-controlled television, meeting officials in Moscow or traveling to Russia’s far-flung regions.

During his absence, the Kremlin unexpectedly canceled a trip to Kazakhstan and a meeting with officers of the successor to the KGB. Pictures were posted on the Kremlin website of meetings Putin had with public figures, which it later emerged had been taken several days earlier.

The absence began a week after an opposition leader was gunned down outside the Kremlin walls, adding to an ominous atmosphere in a country suffering from an economic crisis worsened by international sanctions imposed over Putin’s decision to intervene in neighboring Ukraine.

Throughout his absence Russian officials had said that Putin had been working. Peskov said he had answered “10 times over” what Putin was doing during his absence from live appearances. “It is impossible to say anymore,” he said.

Putin remains hugely popular in Russia, which has experienced a surge of nationalist sentiment fueled by state-run media since Putin sent troops to seize Ukraine’s Crimea region a year ago.

One thought on “Russia’s Putin reappears after 10 day absence, laughs off ‘gossip’”