This is a GUN FREE CAMPUS!

CNN reported that the shooter, a man, had been “neutralized.”  More information about the shooter was not immediately available.

Ray Shoufler, Douglas County Fire Marshal, told CNN the shooting occurred in at least one classroom in the science building. There is a very strong indication the shooter posted online prior to the incident, CNN reports. Investigators are examining social media postings made by a man, thought to be in his late 20s, who they believe is the suspect in Thursday’s shootings. 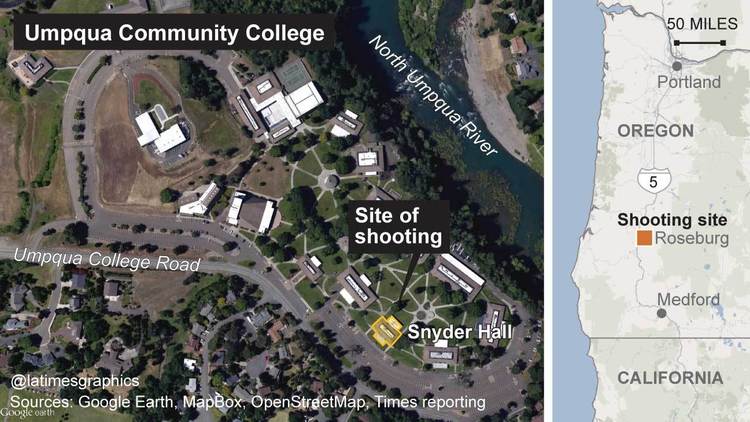 At the White House, President Obama was briefed by officials. Spokesman Josh Earnest said: “sensible steps that can be taken to protect our communities from gun violence continues to be a top priority of this administration.”

The shooting was reported about 10:40 a.m. at Umpqua Community College in Roseburg, about 180 miles south of Portland and about 70 miles from Eugene. The school has about 3,300 full- and part-time students.

Joe Olson, the former president of the school, told the Associated Press that the school has only one security officer on duty at a time, and that person isn’t armed.

The shooting stunned the small community of more than 20,000 people.

Freeman said when his daughter was a freshman, there was a shooting at her high school several years ago, and his 19-year-old son was on campus on Thursday during the shooting.

“We went through this once my daughter,” Freeman said. “Much like everybody else, we had an emergency plan,” he said. “He immediately left campus, went to a friend’s house, to a safe location, and called me.”

“Our community has had to deal with this on some level before,” Freeman said. “You can tell it’s a sad day here, and you see that on people’s faces.”

A photographer for the Roseburg News-Review newspaper said he saw people being loaded into multiple ambulances and taken to the local hospital.

Mercy Hospital in Roseburg confirmed that it has received nine patients and three more were on the way.

PeaceHealth Sacred Heart Medical Center in Springfield, Ore., tweeted that two victims of the shooting had arrived and more were expected.

This article will be updated as more information becomes available.