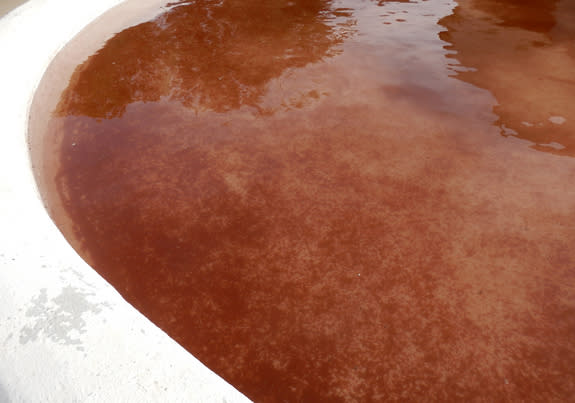 Residents of several villages in northwest Spain received an unpleasant surprise last fall, when they noticed that the water in their fountains had turned a gory shade of red. The tint wasn’t left behind by a guilty murderer’s bloody hands, but rather by microscopic algae that arrived in a recent rainfall.

But at the time, no one knew what had caused their pristine reservoirs to suddenly resemble grisly crime scenes. Speculation ran rampant, blaming everything from contaminants dropped from airplanes to biblical plagues (a similar “blood rain” episode in Kerala, India, in 2001 sparked suggestions that the rain had extraterrestrial origins). Joaquín Pérez, who lived nearby, decided to collect rainwater to see if he could detect the culprit, according to a statement by the Spanish Foundation for Science and Technology.

Over the next several months, Pérez gathered samples, noticing particles in the water that stained it red. He sent the samples to researchers at the University of Salamanca, where they confirmed in a study that the “blood rain” was teeming with microscopic freshwater algae called Haematococcus pluvialis, which produce a red pigment when they’re stressed. Bacteria in the Chromatiaceae family may have caused similarly blood-red water in a Texas lake in 2011. [Photos: The 10 Strangest Places on Earth]

Scientists were surprised to see H. pluvialis, which is common in other parts of the Northern Hemisphere — particularly in North America and along Europe’s Atlantic coastlines — but is practically nonexistent in that part of Spain. “So, they must be coming from some other place,” said geologist Javier Fernández-Lozano, co-author of the study. Analysis of weather data suggests that the algae could have hitchhiked to western Spain on the winds, but, for the present, the origins of this bloodbath are still unknown.

The finding was published Sept. 21 in the Spanish Royal Society of Natural History Journal, and can be accessed on Researchgate.