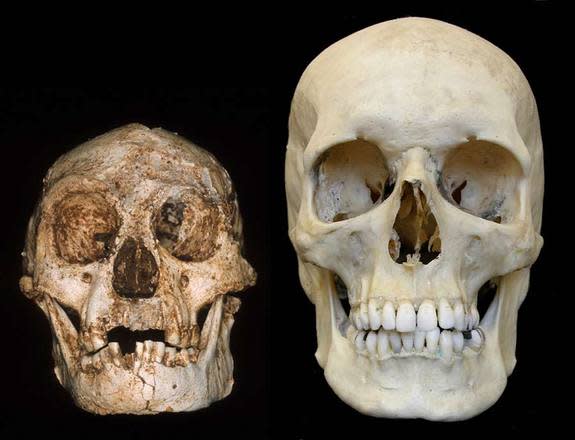 An ancient, 3-foot-tall (0.9 meters) human whose diminutive stature has earned it the nickname “hobbit” has puzzled evolutionary scientists since its little bones were discovered on the Indonesian island of Flores. Some have suggested the individual was a Homo sapien with some miniaturizing disorder.

Now, teeth from the hobbit suggest it belonged to a unique species rather than a modern human with a growth disorder. The new research also suggests hobbits may share a direct ancestor with modern humans.

The 18,000-year-old fossil remains of the hobbit were discovered in 2003. Since then, scientists have suggested that the hobbit, which had a brain about the size of a grapefruit, was a unique branch of the human lineage Homo, dubbed Homo floresiensis. However, other researchers have argued the hobbit was really a modern human with microcephaly, a condition that leads to an abnormally small head, a small body and some mental retardation. [Real-Life Hobbit: See Photos of Homo floresiensis]

To learn more about the hobbit, scientists have now performed the first comprehensive analysis of the ancient human’s teeth. The researchers compared the 40 known hobbit teeth with those from 490 modern humans from Asia, Oceania, Africa and Europe, as well as from a variety of extinct hominins, such as Homo habilis, which is suspected to be among the first makers of stone tools. (Hominins consist of humans and their relatives dating after the split from the chimpanzee lineage.)

The researchers found hobbit teeth were as small as those from short modern humans. However, other features of these teeth looked completely dissimilar from those of modern humans.

These findings contradict earlier claims that hobbits possessed teeth entirely like those of modern humans. The results also suggest hobbits were not just modern humans with severe abnormalities, the researchers said.

The researchers found that the hobbit’s primitive dental features are most similar to specimens of Homo erectus, the earliest undisputed ancestor of modern humans, from the Indonesian island of Java. However, H. erectus was about as tall as modern humans. The scientists suggest that on isolated islands, the ancestors of the hobbit underwent dramatic dwarfism, with their bodies shrinking from about 5.4 feet (1.65 m) to 3.6 feet (1.1 m), and brains dwindling from about 52 cubic inches (860 cubic centimeters) to 26 cubic inches (426 cubic cm).

“For me, this work will turn the tide about the question of evolutionary origin of H. floresiensis,” study lead author Yousuke Kaifu, a paleoanthropologist at Japan’s National Museum of Nature and Science in Tokyo, told Live Science.

While the human lineage generally evolved larger bodies and brains over time, the hobbit suggests that isolation on islands could substantially reverse this evolutionary trend, Kaifu said.