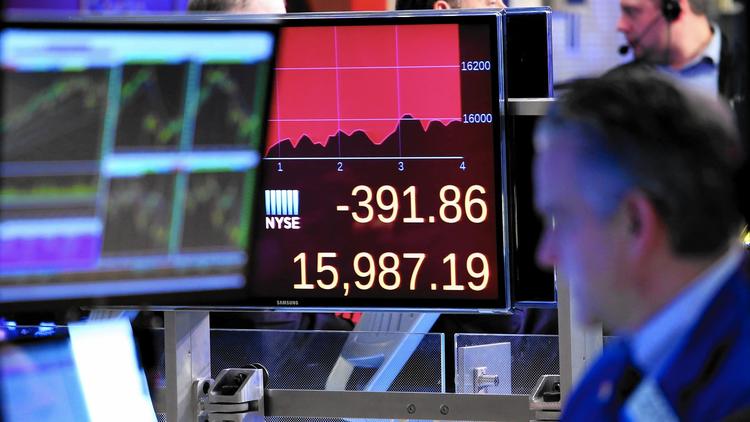 It looks like the schematic for a new theme park ride: plummet from a lofty height through a series of stomach-churning twists.

Unfortunately for most investors and possibly the U.S. economy, it’s a chart of the Dow Jones industrial average this month.

The Dow is down about 8% this year. The other major U.S. stock indexes, as well as key ones around the globe, have followed a similar, hair-raising trajectory.

The tech-heavy Nasdaq composite index also has fallen about 8%. And the broader Standard & Poor’s 500 index is off 7%.

“This is a global economy and a global financial marketplace in significant transition,” said bond guru Bill Gross, who manages the Janus Global Unconstrained Bond Fund. “I think we’ll continue to have volatility.”

The market’s annus horribilis began with a downbeat report on China’s manufacturing sector as Americans were wrapping up their long New Year’s Day holiday weekend. The news amplified fears that the world’s second-largest economy was downshifting faster than expected.

It’s been mostly downhill from there as an overvalued stock market has run head-on into anxiety about slowing global growth — with falling oil prices lubricating the skid.

The U.S. economy finished last year on a seeming high note, with strong job growth in December and a vote of confidence from Federal Reserve policymakers in the form of a long-awaited interest rate increase.

So far, the U.S. has managed to maintain slow but steady expansion despite gathering problems around the world. The economy added nearly 2.7 million jobs last year, which combined with 3.1 million in 2014 produced the best two years of labor market growth since the late 1990s. And 2015 ended on an upswing, including a gain of 60,400 net new jobs in California in December in one of the state’s best performances in recent years.

But the stock market turmoil threatens to rattle consumers — particularly those watching the value of their 401(k) plans shrink — and businesses. That possibility is increasing the still-low risk that the nation will slip into recession this year.

“I think we’re at the point that if the market continues to unravel it’s going to do some damage,” said Mark Zandi, chief economist at Moody’s Analytics, who remains optimistic the U.S. will grow at least 2.5% this year despite the poor start for financial markets.

Here are the outlooks and risks this year in some key economic sectors.

Crude oil fell below $30 a barrel last week for the first time in more than a decade before rebounding. Crude is down about 16% this year and is well off its June 2014 high of more than $100.

The price could go even lower because of a worldwide glut being made worse by the end of sanctions against Iran that had kept it from exporting oil, the International Energy Agency said last week.

The chief executive of BP warned last week that it wasn’t inconceivable for crude to drop to $10 a barrel in the first half of the year before moving back up. The U.S. Energy Information Administration forecasts oil prices will average about $40 this year.

Sharply lower oil prices are a mixed blessing for the U.S. economy.

With gas below $2 a gallon on average nationally, consumers have more money to spend on other purchases. The low energy prices also are keeping down the cost of living.

But the U.S. is a major oil producer and low prices hurt energy companies and the economies of states where drilling and exploration take place, such as Texas, North Dakota and Alaska.

U.S. gas prices can’t get much lower because the nation’s refineries are operating near full capacity, said Carl A. Larry, an oil and gas industry consultant at the Frost & Sullivan consulting firm. And demand is high because of surging auto sales.

“We have more cars on the road than we ever have,” he said. “There’s a chance that as long as the economy stays stable or starts to grow we could see gasoline prices rising and crude oil prices stay low.”

After a disappointing holiday season, retailers could be facing an even slower year.

Although economists had predicted that falling fuel prices would boost sales, many consumers banked their savings or paid down debt. The biggest impediment to spending, analysts said, has been stagnant wages.

“Real median incomes are up fractionally, but all of that growth is concentrated in the top 20%,” he said. “If you’re in the lower 80%, your real income is flat, if not outright down.”

If the economy takes a turn for the worse, even the wealthiest Americans will cut back on their spending. Well-heeled foreign tourists, who are typically big spenders at Southern California stores, will also stop splurging.

Sales in November and December rose 3% to $625.9 billion. That was below the forecasted 3.7% growth and less than the 4.1% increase of the 2014 holiday season. After the lackluster season, Wal-Mart, Macy’s and Kmart said they would close some stores.

But not all retailers are struggling.

Some dollar stores and off-price retailers such as T.J. Maxx and Marshalls have prospered as frugal consumers look for bargains. Shoppers eager to fix up their homes have also boosted the home improvement sector, with Home Depot and Lowe’s delivering earnings at the end of last year that topped Wall Street expectations.

Despite the rough start on Wall Street, it’s not at all clear that commercial or residential real estate developers will shift into lower gear.

Stuart Gabriel, director of UCLA’s Ziman Center for Real Estate, said the stock market plunges have largely been driven by concerns about growth overseas and the falling cost of oil — not the underlying health of the U.S. economy.

That means while housing markets like Houston with many oil-related jobs might see a construction slowdown, a pullback won’t necessarily be widespread or hit California. “I don’t see, at this moment, builders’ plans being affected,” he said.

Gabriel said the recent events haven’t changed his view that the U.S. “is headed toward another year of moderate growth.”

However, he warned that if stocks fall for a prolonged period and oil slides under $20 a barrel, builders would probably start to “increasingly scrutinize” their business plans.

For now, he thinks office building sales could be robust if foreign investors, fearful of a global slowdown, see the U.S. as a haven and pour their money into major metropolitan markets, including Los Angeles. He said any effect on new office construction would probably be muted.

However, there is one end of the industry that is vulnerable: the market for luxury homes with seven-, eight- and even nine-digit price tags.

Already, there are reports, for example, that the ultra-hot London market, driven by hugely wealthy foreign buyers, is cooling off.

John Burns, an Irvine consultant for home-building companies, said luxury home buyers tend to have more money tied up in stocks, which could slow sales “a little bit.”

But he also believes the haven dynamic could come into play here too, prompting some to invest even more in U.S. real estate.

Plenty of banks have made loans to now-struggling oil companies and many have at least indirect exposure to China through customers that do business there. But bankers and economists don’t see either source of market upheaval as huge risks to the finance industry.

What does concern them, though, is that the recent tumult could be a sign of a broad economic slowdown. That could not only cut down on the demand for loans, but also push banks to get pickier about the companies and consumers to whom they lend — and convince Fed policymakers to leave interest rates lower longer, crimping bank profits.

When the Fed raises its key short-term interest rate, it pushes up the rates banks can charge for loans. After a 0.25 percentage point increase last month, central bank policymakers indicated that they plan four similar increase this year. But bankers are now skeptical, expecting perhaps two at most.

“Banks have lived through six years of zero interest rates. Any increase at all is better than what banks have been dealing with,” he said.

Even with slightly higher rates, though, the threat of a global slowdown could push banks to take a cautious approach this year, tightening their lending standards to guard against the possibility of a recession, said Lawrence Summers, an economist and former U.S. Treasury secretary.

“I’d expect banks to become more conservative as prospective losses erode their confidence,” Summers said in an email. “I would expect many (banks) to stand back a bit to assess what is happening.”

The stock market’s tumult hasn’t been kind to tech and media companies, which have seen their share prices fluctuate wildly. The S&P 500 technology index has fallen 9.35% this year, with some non-index companies faring worse: LinkedIn is down 11.4%, Amazon 11.8% and Twitter 22.9%.

That signals a problem for privately held tech firms. Many gorged on a near-record buffet of venture capital over the last five years and are under pressure to drive returns for their investors. To make matters worse, start-ups are seeing their once sky-high valuations slashed in “down rounds,” when they raise new rounds of financing below their prior valuations.

To cope, many are slamming the brakes on plans to go public. Going public any time soon would risk putting some early shareholders underwater.

Another outlet for realizing a return on capital — being acquired — isn’t as wide open a gateway now either. Publicly traded companies seeing their market values crushed may be in less of a buying mood, investors fear, especially to acquire smaller companies that won’t significantly add to profits.

Postponing a sale or IPO has forced cost-cutting at start-ups, including layoffs and scaling back product development.

“People’s expectations are being reset at all stages,” said Dave Young, a Santa Monica attorney at Cooley who focuses on start-up deals. “Entrepreneurs are coming to grips with it. The valuations are still fair and in line with historical norms. They are not bad valuations. They just aren’t the frothy valuations we’ve seen the last couple of years.”

Private-market investors are evaluating new deals more cautiously. Howard Morgan, partner at First Round Capital, said by email that his firm “is certainly seeing more pushback on valuations, and more realism among the CEOs, especially if they’re not raising [funds] from a position of strength,” like having positive cash flow.

Making fewer investments means deal makers can focus on their existing companies. Charlie O’Donnell of Brooklyn Bridge Ventures recently described that situation on his blog, saying venture capitalists would be “busy taking care of their wounded.”