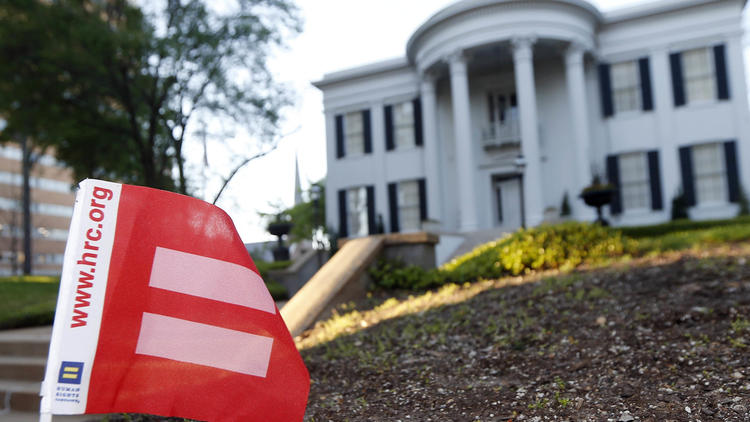 Mississippi Gov. Phil Bryant signed a controversial bill into law on Tuesday that could allow businesses and government workers to deny services to lesbian and gay couples.

Bryant said in a statement that he was signing HB 1523 “to protect sincerely held religious beliefs and moral convictions of individuals, organizations and private associations from discriminatory action by state government or its political subdivisions.”

The law, dubbed the Protecting Freedom of Conscience from Government Discrimination Act, has met with sustained opposition from LGBT groups, businesses and the Mississippi Economic Council. They say the law sanctions discrimination against lesbians and gays.

“Indiana and North Carolina’s anti-LGBT laws were horrendous, but Gov. Bryant’s bill goes even further in denying critical protections and enabling discrimination against LGBT individuals,” Matt McTighe, executive director of Freedom for All Americans, said in a statement.

Authored by Republican Philip Gunn, speaker of the Mississippi House, the law claims to provide protections to people who believe marriage is the union of one man and one woman, that sexual relations should only take place inside such marriages, and that the terms “male” or “female” refer to individuals’ “immutable biological sex.”

It prevents state government from taking discriminatory action against any churches, religious charities and private businesses that decline services to people violating their religious beliefs.

In a statement, Bryant said the law was an attempt to prevent government interference in people’s lives, one that “merely reinforces the rights which currently exist to the exercise of religious freedom as stated in the 1st Amendment to the U.S. Constitution.”

“This bill does not limit any constitutionally protected rights or actions of any citizen of this state under federal or state laws,” he said. “It does not attempt to challenge federal laws, even those which are in conflict with the Mississippi Constitution, as the Legislature recognizes the prominence of federal law in such limited circumstances.”

Last week, Virginia Gov. Terry McAuliffe, a Democrat, vetoed a bill that would have allowed businesses and individuals to cite their religious beliefs as a reason for denying services to same-sex couples. Not only would the law allow discrimination in the name of religious freedom, McAuliffe said in a statement, but it would have been bad for business.

“We should be pursuing policies to make Virginia a more vibrant and welcoming place to live, work and raise a family,” McAuliffe said.

On Tuesday morning, PayPal announced it would abandon a planned expansion into North Carolina because of the new anti-LGBT law. Dan Schulman, PayPal’s president and chief executive, said in a statement that the law “perpetuates discrimination” and “violates the values and principles that are at the core of PayPal’s mission and culture.”

The San Jose-based company’s new global operations center in Charlotte would have employed more than 400 people.

Other companies that have spoken out against North Carolina’s new law include American Airlines, Apple, Bank of America, Facebook, Google, IBM, Microsoft, Twitter and Yahoo.

The Mississippi law would allow government employees to refuse to issue marriage licenses or perform marriage ceremonies. It would also allow businesses and faith-based groups to deny housing, jobs and adoption and foster care services to people based on their sexual orientation or gender identity.

Physicians and other medical professionals could deny sex reassignment or “psychological, counseling, or fertility services” on the basis of their religious beliefs. Government would be prevented from taking action against a person who established “sex-specific standards or policies” concerning “employee or student dress or grooming” or access to restrooms, locker rooms, or dressing rooms.

“This is a sad day for the state of Mississippi and for the thousands of Mississippians who can now be turned away from businesses, refused marriage licenses or denied housing, essential services and needed care based on who they are,” Jennifer Riley-Collins, executive director of the American Civil Liberties Union of Mississippi, said in a statement.

“This bill flies in the face of the basic American principles of fairness, justice and equality and will not protect anyone’s religious liberty,” she said. “Far from protecting anyone from ‘government discrimination’ as the bill claims, it is an attack on the citizens of our state, and it will serve as the Magnolia State’s badge of shame.”