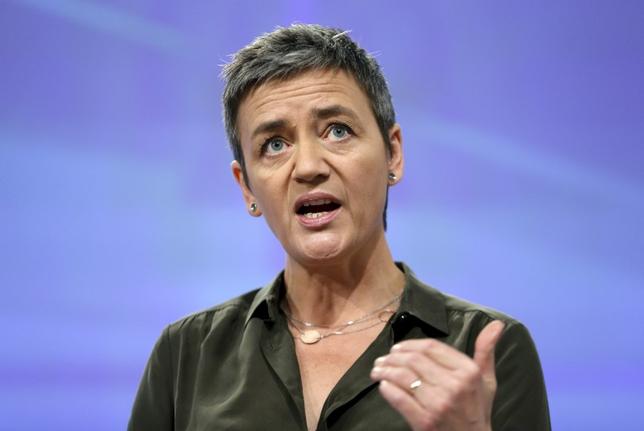 The European competition commission is gearing up to charge Google with giving unfair prominence to its own apps like search and maps in supplementary software licensing deals it strikes with mobile phone makers running its Android operating system, four sources familiar with the process said on Monday.

If the EU were to find Google guilty of market abuse it could lead to a fine of up to $7.4 billion or 10 percent of 2015 revenue, while forcing it to change its business practices.

EU antitrust chief Margrethe Vestager said on Monday her agency’s probe centers on the use of exclusive contracts which enable phone firms to run Google’s own apps and not necessarily on demands they bundle in a complete set of Google apps such as Search, Maps and Gmail and its Google Play app store on phones.

For while Android is open source software that gives device makers the freedom to build and run their own software, the vast majority of European phones run a standard package of software and Google apps that must be licensed from Google, according to data from Strategy Analytics, a technology market research firm.

“Our concern is that by requiring phone makers and operators to pre-load a set of Google apps, rather than letting them decide for themselves which apps to load, Google might have cut off one of the main ways that new apps can reach customers,” Vestager said at a regulatory conference in Amsterdam.

“We are looking into the question of tying, but tying in itself is not necessarily a problem,” she added in response to a question about whether the EU had narrowed its list of concerns over Android.

“It depends on how it’s made but that is part of our investigation, which as I said, is not done yet,” she said, giving no further hints on the timing of when her agency might expand its charge sheet against Alphabet Inc’s (GOOGL.O) Google.

A year ago the EU charged Google with favoring its own shopping service in Internet searches, adding at that time it was also investigating whether the advertising giant was abusing its control over Android. A decision on the shopping service case could come later in 2016. Since February the EU watchdog has been asking complainants concerning Android to remove sensitive details from information provided to the Commission before it provides the data to Google for its defense, four people familiar with the matter said.

However, some companies contacted by EU regulators last week were given a 24-hour deadline to do so, the first time regulators have set such a tight deadline, suggesting a charge sheet may be sent within days, three of those sources said.

The EU competition office in Brussels declined to comment on whether new charges involving Android were in the works.

A Google spokesman denied that it forces phone vendors into exclusive contracts and said talks with the EU were continuing.

“Anyone can use Android with or without Google applications. Hardware manufacturers and carriers can decide how to use Android and consumers have the last word about which apps they want to use,” Google spokesman Mark Jansen said in a statement.

Google requires phone vendors to sign confidential contracts. A handful of those contracts which have leaked into the public realm do not explicitly force phone makers to pre-load certain Google apps, but they do, effectively, require it in order for phone makers to install the Google Play app store.

Two thirds of all mobile phones used in Europe this month were running on Android, according to StatCounter data. Devices running on Apple’s proprietary iOS software account for another 27 percent, leaving other systems such as Microsoft (MSFT.O) or Blackberry (BB.TO) barely registering in the rankings.

Lawyers for several of the complainants as well as antitrust experts not directly involved in the case, said charges against Android may be easier for EU to prove because it is based on a set of contracts that make it easier to show illegal behavior and to propose remedies that free up competitors.

FairSearch, which is backed by Google rivals including Microsoft (MSFT.O), Nokia (NOKIA.HE) and Oracle (ORCL.N), lodged the first official EU complaint against Android in 2013.