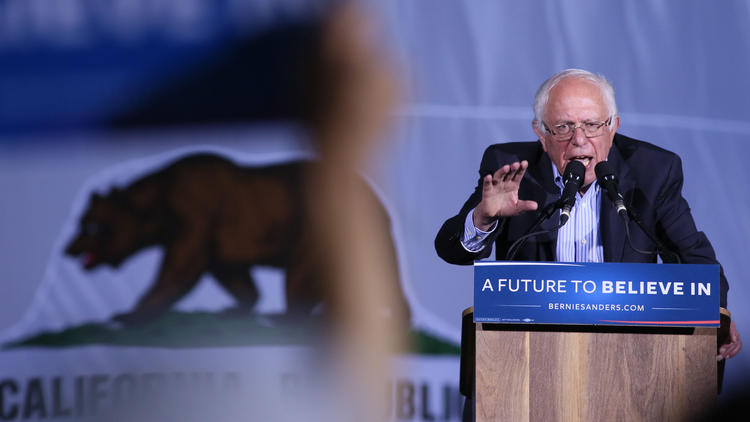 A federal lawsuit alleging widespread confusion over California’s presidential primary rules asks that voter registration be extended past Monday’s deadline until the day of the state’s primary election on June 7.

“Mistakes are being made,” said William Simpich, an Oakland civil rights attorney who filed the lawsuit Friday.

At issue is whether voters understand the rules for the presidential primary, which differ from those governing other elections in California.

Unlike statewide primaries — where voters now choose any candidate, no matter the political party — the presidential contests are controlled by the parties themselves. Democrats have opened up their primary between Hillary Clinton and Vermont Sen. Bernie Sanders to voters that have no political affiliation, known in California as having “no party preference.”

But the lawsuit alleges elections officials in some of California’s 58 counties aren’t making that clear to these unaffiliated voters.

“There’s mass confusion,” Simpich said in an interview on Saturday night. “This is a situation that really shouts out for some uniformity.”

Simpich said a judge should require state elections officials to conduct a broad public awareness campaign about the voting rules before May 31, the deadline for requesting a ballot by mail.

And to ensure unregistered Californians aren’t disenfranchised in the presidential contest, the lawsuit asks voter registration be extended from its deadline on Monday until June 7, the day of the election.

There is no indication yet of whether a judge will agree with the suit.

The lawsuit’s plaintiffs include two Bay Area voters and the American Independent Party, a minor party that is allowing unaffiliated voters to cast presidential ballots and has also faced its own problems with voter confusion in recent weeks.

(The Republican Party did not open its California presidential primary to unaffiliated voters.)

Also listed as a plaintiff is a group called the Voting Rights Defense Project, described as “an organization campaigning to heighten voter education and voter turnout for their candidate, Bernie Sanders.”

The lawsuit names the registrars of voters in San Francisco and Alameda counties as well as Secretary of State Alex Padilla as defendants.

A spokesman for Padilla on Sunday declined to comment on the pending litigation.

The suit focuses on whether “no party preference” voters who intend to cast ballots by mail understand they can ask for a ballot from one of the three parties that allow them to cross over and participate in the race for president: the Democratic Party, the Libertarian Party, and California’s American Independent Party.

If they do not make the request, those voters will receive a ballot with a blank space where partisan ballots list the presidential candidates.

The lawsuit alleges that some counties have not done an adequate job of informing these voters. A recent report by Political Data Inc., a company that is paid to analyze California voter information for candidates and campaigns, found relatively few unaffiliated voters have asked for a ballot with presidential candidates.

As of last week, only 9% of “no party preference” voters in Los Angeles County had been mailed a Democratic ballot.

Neal Kelley, registrar of voters in Orange County and president of the state association of elections officials, said that about 23% of his county’s “no party preference” voters have asked for partisan ballots. And he said that the outreach effort was carefully planned.

“Counties have been gearing up for this for well over a year,” Kelley said.

While he would not comment on the allegations contained in the federal lawsuit, Kelley said it’s not possible for elections officials to register voters on election day. California has plans to move to a “same-day registration” system in 2018 after certifying its new statewide voter database.

In the meantime, the current elections process relies on paper documents at each polling place listing eligible voters.

“The infrastructure’s not in place,” said Kelley.

Both Sanders and Clinton are ramping up their efforts in California with the presidential primary a little more than two weeks away. Sanders held a rally outside of San Diego on Saturday and has multiple events planned, while Clinton arrives Monday night and plans several days’ worth of events.

Supporters of Sanders, whose candidacy has been boosted in other states by independent voters, are intently focused on the state’s “no party preference” voters who now account for roughly one quarter of the registered electorate.

He said accusations have been made that some elections officials are training poll workers to hand out provisional ballots on election day to any “no party preference” voter who asks for a partisan presidential ballot, and even then only if one is requested.

Provisional ballots are used for instances of last-minute confusion and only counted after a special effort at verifying a voter’s identity.

Kelley said “no party preference” voters can easily resolve problems on election day — including those who didn’t receive the ballot they wanted in the mail.

“They can take that ballot in and surrender it,” he said. “There’s no need to vote a provisional ballot in that case.”